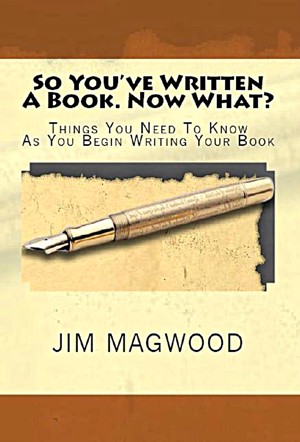 So You've Written A Book. Now What?

Written from the author's almost fifteen years of writing my first five books and publishing and marketing them, it’s not “expert” material; it’s just what I’ve learned and what I'd like to share with you as you are perhaps on the same writing trail.

Filled with hundreds of hints and suggestions to make your writing life easier.

Jim Magwood was born too many years ago in Vancouver, Canada. He was dragged south across the border by his parents when he was too young to protest and has lived in California the rest of his life.

He entered the military right after high school, then attended college and began a career in business. His military work and years in various business management positions had him traveling to many parts of the world and he remembers well the beauty (as well as the poverty and unrest) of so many places.

Jim is happily married to Gayle.

He retired early and moved from the city to their quiet country place in Twin Oaks, California. The loudest noises now are the few barking dogs, some howling coyotes, the wandering cattle and a million raucous birds. The rabbits, quail and coyotes have come to recognize that Shiloh (the ranch) is a sanctuary for them, so they hang around every day looking for handouts.

Jim just hangs around the ranch trying to be a hermit (at least that's what a lot of people think.) He does still manage to get shaved once in a while and can look half-way presentable when someone comes up the driveway (if given enough warning.)

Jim's work now appears to be writing. SANCTION took about ten years to finish, as it was written in bits and pieces. However, right after it was finished and sent to the publisher, what was left of the old mind began churning and there may be another few novels coming out in the future. Don't hold your breath, but... THE LESSER EVIL, COP, NIGHTMARE,JACOB, ONLY THE WATCHMEN WEEP and THEREFORE I AM are now out in the reading world waiting for you. More coming? We'll see...

Jim would love to hear from you, especially if you've bought a dozen or so of the books and passed them out to all your friends and neighbors. Give him a write some day, ask questions and swap stories. After all, he doesn't have anything else to do. You can catch him at JimMagwood@aol.com. (And he does answer his mail.)

You have subscribed to alerts for Jim Magwood.

You have been added to Jim Magwood's favorite list.

You can also sign-up to receive email notifications whenever Jim Magwood releases a new book.