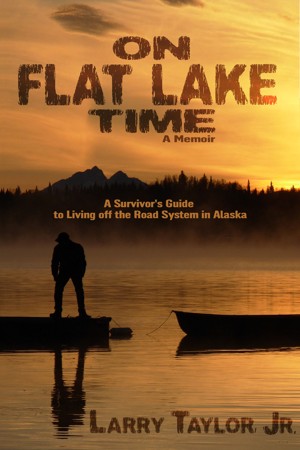 On Flat Lake Time is a Survivor's Guide to Living off the Road System in Alaska. More
Beauty and interest surround me at the cabin. The stars are brilliant, the Northern Lights a wonder, and the peace here looking at the lake can be as in a dream. The life around us is a constant susurrus in the trees, punctuated by the plaintive wail of loons and the whistle of mallards' wings. On Flat Lake Time is the story of how my beautiful, resourceful wife, Gail, and I solved the many unforeseen problems encountered when we moved off the road system to a remote cabin on a lake in Big Lake, Alaska. It chronicles the adventurous lives of the Flat Lake “home guard” and the shift in perspective it takes to fully enjoy and look forward to the next challenge.

I was born in Bryn Mawr, on the Main Line, six miles outside of Philadelphia. I attended The Haverford School, a college preparatory school for boys, as my father had done. While attending Haverford College, across the street from my prep. school, I successfully bid on a place on an archaeological dig to Alaska's North Slope in 1967 before Alaska's oil was discovered. I became enamored with Alaska and returned after college, not knowing then that I would stay. I first worked as a dynamiter for logging road construction, then returned to college, this time in Fairbanks. I married a beautiful woman, became a chemist in a pulp mill, started a chemistry lab, and worked as an environmental engineer in public health. We finally moved off the road system. I have written about this, our greatest move, and my Alaskan experiences in the memoir On Flat Lake Time.

You have subscribed to alerts for Larry Taylor, Jr.

You have been added to Larry Taylor, Jr's favorite list.

You can also sign-up to receive email notifications whenever Larry Taylor, Jr releases a new book.