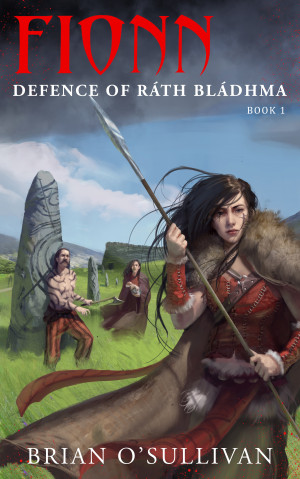 Ireland: 192 A.D. Inter-tribal conflict has set the country on edge. In the secluded valley of Glenn Ceoch, disgraced druid Bodhmall and the woman warrior Liath Luachra have successfully avoided the bloodshed for many years. Now, the arrival of a pregnant refugee means they must fight to survive a mysterious war party and a ruthless magician intent on murder. More
Ireland: 192 A.D. A time of strife and treachery. Political ambition and inter-tribal conflict has set the country on edge, testing the strength of long-established alliances.

Following their victory over Clann Baoiscne at the battle of Cnucha, Clann Morna are hungry for power. Meanwhile, a mysterious war party roams the ‘Great Wild’ and a ruthless magician is intent on murder.

In the secluded valley of Glenn Ceoch, disgraced druidess Bodhmall and the woman warrior Liath Luachra have successfully avoided the bloodshed for many years. Now, the arrival of a pregnant refugee threatens the peace they have created together. The odds are overwhelming and death stalks on every side.

Brian O'Sullivan was born in county Cork, Ireland. On completing a degree at University College Cork, he went on to travel extensively. He is now based in New Zealand with his family but returns to Ireland on a regular basis. He writes weekly articles on Irish Folklore or on his writing at his website which can be found at: http://irishimbasbooks.com or on the Irishimbasbooks Facebook page.

Although he writes predominantly for an Irish audience, Brian's unique style and humour has meant that his books have become firm favourites of readers all around the world.

The third book in the Fionn mac Cumhaill Series (Fionn: The Adversary) was released on February 2017. Brian is currently working on the fourth book in the series.

Brian has also edited and provided cultural context for 'The Celtic Mythology Collection' - a series of short story collections based on elements of Celtic cultural mythology. The most recent in the series was released in March 2017.

About the Series: Fionn mac Cumhaill

The Fionn mac Cumhaill series is a series of Irish mythological and adventure novels based around some of the early events outlined in Macgnímartha Finn (The Boyhood Deeds of Fionn).

An exciting contemporary version of a narrative that’s almost a thousand years old, it recounts the adventures of Fionn during his upbringing at Ráth Bládhma and of the people who protected him there (his aunt Bodhmhall, the woman warrior Liath Luachra, Fiacail mac Codhna and Muirne Muncháem). Despite being a work of historical fiction, the series aligns completely with the original 12th century manuscript on which it is based.

You have subscribed to alerts for Brian O&#039;Sullivan.

You have been added to Brian O&#039;Sullivan's favorite list.

You can also sign-up to receive email notifications whenever Brian O&#039;Sullivan releases a new book.