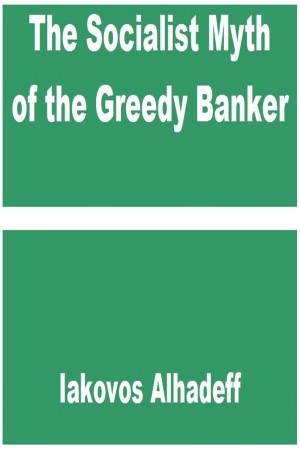 The Socialist Myth of the Greedy Banker

By Iakovos Alhadeff
Rated 2.50/5 based on 2 reviews
The essay explains why private banks and the private sector in general have nothing to do with the current economic crisis, which was 100% the result of government policies in Europe, U.S.A, and China. Moreover the interconnection between private and central banks is explained. This is the first part of a series, with "The Socialist Myth of Economic Bubbles" following. More
There is a wide spread belief that it was the private banking sector that caused the current economic crisis. “Greedy” private bankers destabilized the economy, as socialists put it. At the same time, there are many conspiracy theories about central banks around. According to these theories, central banks are controlled by “dark” forces, and these forces caused the crisis of 2008.

As a result, most people without a background in economics are very confused. However reality is much simpler than it seems to be. The purpose of this essay is to explain why the crisis of 2008 has nothing to do with the private banking sector, and also explain the role that central banks play in the economy. This document, together with “The Socialist Myth of Economic Bubbles”, should give the reader a good understanding of the current crisis, and why this crisis was the result of the wrong government policies in Europe, U.S.A. and China.

This essay follows the tradition of the great Austrian economists, like Ludwig von Mises, F. A. Hayek and Murray Rothbard. No prior economic knowledge is required on behalf of the reader. A genuine interest on the subject will suffice.
Download: epub mobi (Kindle) pdf more Online Reader
rtf lrf pdb txt
Price: Free! USD
Add to Library
Create Widget
Tags: austrian economics money creation how banks work how central banks work introduction to austrian economics introduction to banking the causes of the economic crisis the gold standard how the federal reserve works introduction to central banks money as debt
About Iakovos Alhadeff

I have studied economics to postgraduate level. I never worked as an economist though. I worked in the field of charter accountancy
and I completed the relevant professional exams (the Greek equivalent of the English A.C.A.). My essays are written for the general reader with no economic or accounting knowledge, and the emphasis is on intuition. All my documents are extremely pro market and quite anti-socialist in nature. I admire economists from the Chicago and the Austrian School i.e. Milton Friedman, Ludwig von Mises, Friedrich Hayek, Henry Hazlitt, Murray Rothbard. I am Greek and English is not my first language, so I hope you will excuse potential errors in my syntax.

Private Banks do not create money. They do however for the most part loan money. But now the US has a bigger deficit & inflation runs rampant. Millions of PPL under/unemployed. Barter economy is a great idea, not much used in the US nowadays. Over producing a perishable in today’s economy is not good, look how much is wasted on a daily basis now. Gold & diamonds is held by very few so the value fluctuates a lot.
Cool book cover, great font & writing style. A fairly well written economic short story (book) with a cultural ethnic twist. It was fairly easy to read/follow from start/finish & never a dull moment. No grammar errors, but there are several repetitive &/or out of line sequence sentences. This could make a great PP presentation. Pretty basic econ 101, I’ll have to rate it at 4/5 stars.
Thank you for the free short story (book)
Tony Parsons MSW (Washburn)

When someone starts talking about mythical, imaginary "socialists," one can assume that person is confused. One can read this Free Market Fundamentalist religious tract and get the same conclusion.

When the writer tried and failed to draw an analogy between brokering real estate (a physical property) with brokering money (an imaginary belief in tokens being the same value as what the tokens represent), I gave up reading this tract in disgust.

When the Bush2 Regime deregulated the banking industry, bankers engaged in predatory money fabrication: offering real wealth in the form of real estate, goods and services, in exchange for imaginary money that would represent future wealth generated by the borrower. The bankers knew fully well that the borrowers could never pay back the imaginary money with real wealth, so the bankers took out insurance against the day when the borrwers would default--- in most cases they reported to the underwriters risk rates far lower than the true risk.

The bankers thus bled the banking industry of TRILLIONS of dollars, which the USA government Federal depositor's insurance was forced to put back into the system. The writer of this tract wishes people to believe that all of this never happened, and that the Bush2 Recession was caused by the Bush2 Regime, not the bankers.

You have subscribed to alerts for Iakovos Alhadeff.

You have been added to Iakovos Alhadeff's favorite list.

You can also sign-up to receive email notifications whenever Iakovos Alhadeff releases a new book.