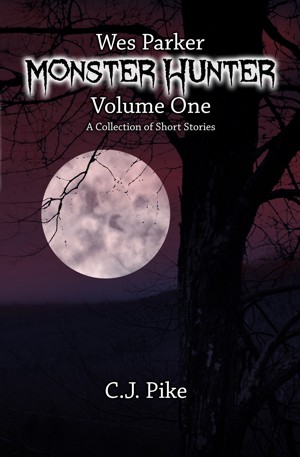 By C.J. Pike
Rated 4.00/5 based on 1 reviews
They hide in the dark, late at night. They wait eagerly to devour your flesh and savor every last bite. The world is a very dangerous place and you have no idea just how dangerous it really is. If my life hadn't changed when I was 11 then I might be just as naive as the rest of you. My name is Wes Parker and I have a very unique job. I hunt Monsters. More
In the dark, when you hear a rustling in the bushes outside your house, you wonder if it could possibly be a monster lurking outside your home. Guess what? It is. They do exist and they do want to eat you, savoring every last bite. Run if you wish. Hide if you can. You probably won’t escape. Unless I can get to them before they devour you.

Day in and day out I search for, find and kill monsters of all shapes, sizes and breeds. Seems tough but not for me because I’m a paladin. Basically that means I’m strong and fast, and I have few other tricks up my sleeve. Plus I’m not a sniveling wimp.

Read my stories if you dare. Seriously just read the book. Even a baby could handle it. You’re not wimpier than a baby, are you?

Cory grew up in a small town in central Massachusetts. He showed an interest in telling stories from a young age, and began pursuing that interest in high school through writing and movie making. He went on to earn a degree in Broadcasting and Telecommunications, and discovered a passion for writing through his Creative Writing class. He also writes young-adult fantasy stories called the Half-Breed Series. He currently resides in Central Massachusetts with his wife, Jennifer and son, Oliver. Follow him on Twitter @cjpikebooks.

This book is laugh out loud funny, it's probably one of the funniest books I've read in a while. The main character is a kind of stupid teenager with super-powers who hunts vampires, werewolves, trolls, etc.

If you're expecting a serious work you're going to be disappointed, this isn't it, but for what it is, it's pretty good.

The humour style isn't real common in mainstream works, but it reminds me of webcomics. It's a sort of free-spirited, funny-cool combination that doesn't take itself very seriously.

It has some oddities in the language used in various parts. It felt like it could use the hand of a serious editor, on the other hand sometimes editors tend to flatten out the jokes a bit on comedic works in this sort of style, so it might be better to live with the occasional oddness. Plus either it got better, or I got used to it, because after the first story I pretty much didn't notice it any more.

Overall, I'd recommend it, since I thought it was hilarious despite the occasionally disjointed language, so I'm giving it a rating of "Good/Recommended" or four stars, and if the editing was a little better I'd upgrade that to "Strongly Recommended" or five stars.

You have subscribed to alerts for C.J. Pike.

You have been added to C.J. Pike's favorite list.

You can also sign-up to receive email notifications whenever C.J. Pike releases a new book.