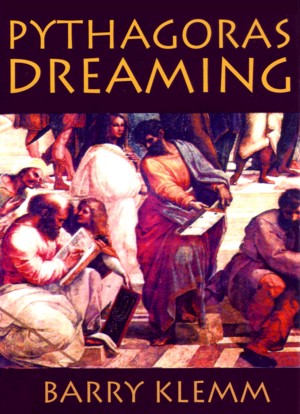 Milo the Olympian investigates the murders within the Pythagorean Brotherhood More
Pythagoras lies dying at the end of his long and magnificent life. Part genius, part mystic, he has devoted himself to defining the perfect cosmic system he created, the great unity of numbers and mathematics and the universe. But suddenly, it has all gone horribly wrong—a terrifying secret has arisen within the Brotherhood of his loyal followers, and murders are committed to protect it.
Tormented by memories and nightmares alike, ravaged by the Furies, by turns vague and lucid, Pythagoras refuses to face the fact that the utopian society that he has created is coming apart at the seams.
As Milo of Corinth, his protector, put it: “Pythagoras dreamed this perfect society into existence, and now he is dreaming it out of existence again.”
In Croton, the fabulous city that has prospered remarkably under the guiding hand of the Pythagoreans, the people rise in the streets, intent on driving the Brotherhood into the sea. For not even the great wealth and glorious social harmony of a place where men and women are regarded as equals and everyone benefited equally from the Pythagorean innovations is worth the terror struck into the hearts of the populous by the Unspeakable secret and the vengeance of the raging Furies.
Milo, three time Olympic champion, stands like a colossus between the forces of chaos and the great and wonderful dream of Pythagoras, but even he—the most loyal of all—knows that the disaster descending upon them is the direct result of the genius of Pythagoras run out of control and turned to madness.
Available ebook formats: epub mobi pdf rtf lrf pdb txt html
Price: $2.99 USD
Buy Add to Library Give as a Gift
How gifting works
Create Widget
Tags: murders mathematics pythagoras
About Barry Klemm

Barry Klemm enjoyed an array of abandoned careers before resorting to literature. He was a crane jockey, insurance clerk, combat soldier, advertising officer, computer programmer, cleaner, stagehand, postman, sports ground manager, builder's labourer, taxi-driver, film and TV scriptwriter and radio dramatist. He has published two novels for teen-age readers, The Tenth Hero, in 1997, and Last Voyage of the Albatross in 1998 through Addison Wesley Longman and Running Dogs, a novel of the Vietnam war by Black Pepper in 2000.

You have subscribed to alerts for Barry Klemm.

You have been added to Barry Klemm's favorite list.

You can also sign-up to receive email notifications whenever Barry Klemm releases a new book.