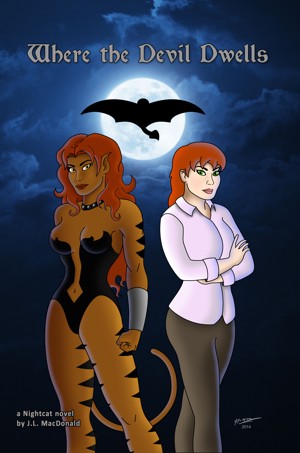 Where the Devil Dwells

By J.L. MacDonald
Rated 5.00/5 based on 1 review
"The only thing worse than having superpowers is losing them."-Nightcat

Seemingly back from the dead, Nightcat's greatest and most powerful foe proposes a truce. Reluctantly she agrees, but soon finds herself seeking his help in dealing with Laura Sheedy, a reporter determined to reveal Nightcat's secret identity, and Wraith, a mysterious figure hell-bent on making Nightcat his partner. More
"The only thing worse than having superpowers is losing them."-Nightcat

Dana Harker, a senior systems designer and a self professed workaholic, was abducted and forcefully underwent a risking and potentially lethal procedure to turn her into the ultimate spy: Nightcat. That was the end goal for her captor, Raphael, a humanoid man bat. But Dana had other plans.

Reviews of Where the Devil Dwells by J.L. MacDonald

I try to keep up with the writing of J.L. MacDonald on Facebook. She has a witty personality that endears her to her readers and that wit translates into her written work. Thus is the case here.

Where the Devil Dwells is the second Nightcat novel. The story picks up a month after the last book. Dana and Detective David Rayner have moved their relationship along. Dana is back working at NyTech when she finds out that the man who was responsible for her mutation somehow survived the first novel. Paige, Kurt and Trinity return, along with Dana’s brother and his daughter. We are introduced to Dana’s parents. Old characters are nicely fleshed out.

We also see the man-bat, Raphael, go from a villain to more of an anti-hero, ala the Punisher. Well, sort of.

But Nightcat still has her moral core. Unlike Raphael, she wants to help people and uses her powers to do so. She has become so accustomed to her alter-ego that she becomes melancholy when she thinks she’s lost it. On the other hand, when she begins to lose control of her ability to change, she worries that her intimacy with David could put him in danger as she could get a little . . . too excited.

The book, like the last one, reads like a comic story arc. Several plot points are touched on and I could almost point out places where issues of a comic would end and begin.

Though I loved the book and feel that, as usual, the author uses an easy to understand style, I must comment on the maturity level. Unlike the other stories, the sensuality level is pumped up a bit in this book, though the sexuality between Dana and David almost needed to be in the novel in order to work in the plot point of her losing the ability to control her transformations. There’s also an F-Bomb at one point. It’s not a children’s book. However, if you watched the Blade movies and enjoyed them, then you would be comfortable here. But it’s a bit more mature than the Avengers or any of its component prequels.

Other than that comment, I would say that the writing is definitely five-star

You have subscribed to alerts for J.L. MacDonald.

You have been added to J.L. MacDonald's favorite list.

You can also sign-up to receive email notifications whenever J.L. MacDonald releases a new book.