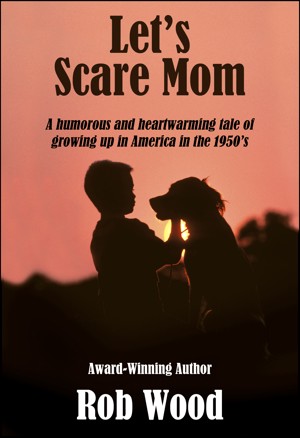 By Rob Wood
Let’s Scare Mom looks back through my eyes at the 1950s and lays open some of my more memorable adventures growing up on a ranch with two brothers and my best friend, confidant and canine companion…Snorkie. Laced throughout the chapters is an unmistakable message addressing family dynamics that will surely conjure up events of your own childhood. More
What makes a truly great story? A great story begins and ends with a narrator that is trustworthy. I don't mean trustworthy as in you can trust him with your wallet or wife, I mean trustworthy in a manner that makes you feel and believe every word he shares. That is Rob Wood and I truly value him for his mastery of storytelling!

LET'S SCARE MOM, Rob's follow up to THE FIVE GREATEST SPANKINGS OF ALL TIME (the classic memoir of three ornery boys giving their parents fits on "Rancho Roberto" in the 1950's) is a magnetic extension of those funny and endearing escapades. Rob's voice alone is worth the ride. His delivery and eye for detail transport us to a place and time long forgotten and deftly reveal a landscape of body and soul that reminds us why America and her characters are so profoundly unique. LSM follows Rob (the narrator) as he transitions into young adulthood and get ready 'cause this new adventure takes us places unsuspecting, hysterical and even heart wrenching.

I'm certain you will enjoy these continuing exploits as much as I did! LET'S SCARE MOM is a book that will ignite a smile, warm your heart and sooth the subliminal yearning for your own childhood.

After completing college and a two year tour of duty in the Army, award winning author Rob Wood followed in the footsteps of his forefathers and spent several decades cowboying in Colorado, Wyoming and Montana. Pursuing a calling to dude ranching, producing rodeos and ranch real estate allowed him to fulfill many of his childhood dreams. Rob honed his storytelling skills around campfires of the Rocky Mountain west.
Rob’s first book of short stories, “The 5 Greatest Spankings of All Time” was published in 2012 to critical acclaim. The Texas Association of Authors awarded it First Place in the Short Story Fiction category of their 2012 Literary Awards. Rob’s new book “Let’s Scare Mom” unfolds around those original tales and continues to pack the tastes and smells of the 1950’s into his humorous and very personal stories.
Aside from writing, Rob enjoys spending time with his grandchildren, cooking indoors as well as over an open fire and riding a good horse along the Continental Divide. Rob, his wife Ellen and their dogs Babe and Casey currently live outside of Dallas, Texas. 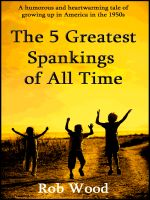 You have subscribed to alerts for Rob Wood.

You have been added to Rob Wood's favorite list.

You can also sign-up to receive email notifications whenever Rob Wood releases a new book.