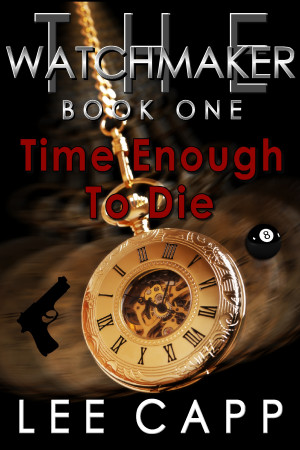 Rated 4.00/5 based on 1 reviews
Across the Pacific Northwest two men fight against time to save the life of an innocent young woman--and their own souls. More
When an old Spokane serial killer cold case becomes red-hot again in the small town of Bellevue, Washington--Chief of Police Howard J. Carter is forced to join forces with ex-partner and arch enemy Johnny O'Brien, a retired Police Department Homicide Detective, now a writer of tawdry crime novels. Together Carter, O'Brien, beautiful young Police Officer Linh Zhou, and handsome and mysterious time-traveling watchmaker Matt McCabe, team up to track down a brutal and ruthless killer apparently back from the dead, before his body count can reach dizzying new heights. Can this unlikely team of heroes and misfits end this reign of blood and terror and uncover old crimes and dirty secrets from decades past and present before it's too late? Join in on the fun and the action of THE WATCHMAKER--TIME ENOUGH TO DIE, and find out.
Download: epub mobi (Kindle) pdf more Online Reader
lrf pdb txt
Price: Free! USD
Add to Library
Create Widget
Tags: murder mystery detective timetravel serialkiller lee capp
About Lee Capp

Lee Capp (Larry Lee Caplin) was born in Detroit, Michigan in 1949, back when the Motor City was the crown jewel of the Midwest, and the center of the manufacturing might of America. Raised on motors and Motown and brought up in a tiny suburb called Walled Lake, he had a very misspent youth focused on rock and roll music, amusement parks, good friends (some of which were even girls) movies, golden age television shows and fortunately lots of really good books. Personal favorites among them were the popular anthologies of Alfred Hitchcock and Dorothy Sayers and the crime novels of Ellery Queen and Mickey Spillane. In addition to being a life-long writer of what he calls "Unsold and unsellable dumb stupid stuff" Capp has worked in many fields during his long career, including a short but very interesting stint as an apprentice embalmer in a Tucson, Arizona funeral home and a fish monger in Seattle, Washington. The fish selling he has said was equivalent to an advanced college degree in the study of human nature. Johnny O'Brien is a compilation of Capp himself, who descends from Irish, Scottish and English farmers, fishermen and lumberjack immigrants, and he says, a number of other (verbally at least) bad-assed friends of his youth. Capp says that "if we all were even a tenth as tough as we thought we were, we could have ruled the world." Lee Capp and his wife Bea, retired at last from the workaday world, now reside among the pines, ponds and streams outside Seattle, Washington, where he continues to see just how much trouble he can get Johnny O'Brien and Matt McCabe into the next time around. Contact the author at lee.capp.976@facebook.com, On Facebook as Larry Lee Caplin (Lee Capp) and leecapp@yahoo.com

Also in Series: The Watchmaker

Twisty, complex and a very satisfying ending. Nice to have a well-written story free of SPaG errors and with solid, believable characters. A little confusing in a couple of places but it all pulled together in the end.
Definitely one to re-read.

You have subscribed to alerts for Lee Capp.

You have been added to Lee Capp's favorite list.

You can also sign-up to receive email notifications whenever Lee Capp releases a new book.