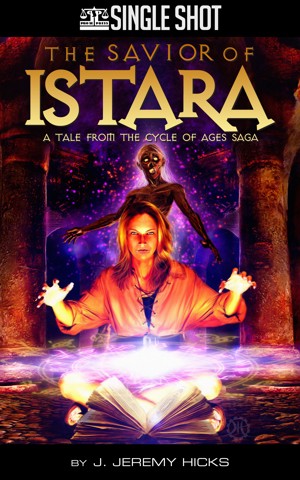 THE SAVIOR OF ISTARA: A Tale from the Cycle of Ages Saga by Jeremy Hicks is both a quest story and a tale of revelation. Follow Tameri as she ascends as a Hero by descending nearly into the depths of Any and All Hells. THE SAVIOR OF ISTARA by Jeremy Hicks.
Available ebook formats: epub mobi pdf rtf lrf pdb txt html
Price: $0.99 USD
Buy Add to Library Give as a Gift
How gifting works
Create Widget
Tags: pulp fiction pulp heroes new pulp cycle of ages
About Jeremy Hicks

After nearly dying at birth, Jeremy Hicks gave up his ghost during the sorrowful autumn of his twelfth year. The outsider that occupied his body from that point onward did the best it could to imitate him. However, this being’s bizarre sense of humor and inability to fully mimic human emotions kept it an outsider. After many unhappy years of trying to assimilate to this plane of existence and its daily doldrums, he turned to the cadre of demons in his life for other options. He teamed up with one of them inhabiting a ginger known as Barry Hayes and together they turned their nightmares into fiction.

The writing team of Hicks & Hayes created an original horror-fantasy environment (Faltyr), wrote a screenplay (The Cycle of Ages Saga: Finders Keepers) to introduce it, and then adapted it into a novelization of the same name. As a result, their first novel was published by Dark Oak Press in August 2013. Its sequel, Cycle of Ages Saga: Sands of Sorrow was published in 2015. In 2017, Broke Guys Productions released new editions of both novels with coordinating covers by Enggar Adirasa and D. Alan Lewis.

Jeremy is also a poet and short story writer. Three of his short stories are featured in Dark Oak Press anthologies (Capes & Clockwork 1 & 2; Luna's Children: Full Moon Mayhem). Pro Se Press/Productions has published one of his stories on Smashwords(Savior of Istara, a tale from the Cycle of Ages Saga).

Reviews of Savior of Istara by Jeremy Hicks

You have subscribed to alerts for Jeremy Hicks.

You have been added to Jeremy Hicks's favorite list.

You can also sign-up to receive email notifications whenever Jeremy Hicks releases a new book.