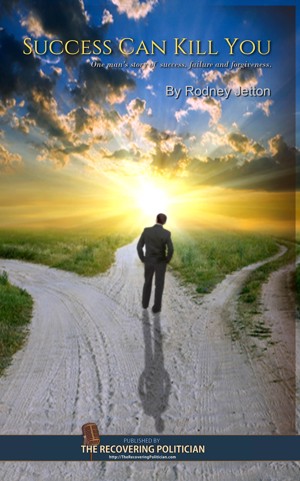 Success Can Kill You: One man’s story of success, failure and forgiveness

On December 7, 2009, he was arrested for felony assault after a one-night stand with a woman he connected with on Facebook. Soon after that, he received a call from a former girlfriend telling him she was pregnant and he was going to be a father at the age of 42. Then, just a few weeks later, Rod found out he was the target of a grand jury investigation from his handling of a bill when he was Speaker.

Politicians, pastors, businessmen, church leaders and corporate executives all pour their lives into attaining success. Hearing Rodney’s testimony of how the pursuit of power and his unparalleled political success almost destroyed his life is one that anyone in a leadership position should take advantage of.

His candid way of explaining his mistakes and pointing out the dangers of putting his career in front of his faith and family will be of great benefit to driven leaders focused on accomplishing their goals. Rodney’s ability to identify the early warning signs of pride, bitterness and paranoia in his life are exactly the type of cautionary advice anyone who is experiencing success needs to hear. Rodney does a great job of keeping the reader’s interest with forthright stories, useful illustrations and sound advice. Thoughtful leaders would be wise to read this book and heed the warnings gleaned from his mistakes.

Rodney Jetton is a former Speaker of the Missouri House and a skilled communicator who has candidly shared his personal story of success, failure and forgiveness with elected officials, Christian men’s groups, student assemblies and church audiences all across America. He currently owns Targeted Communications, a content marketing company helping businesses build better relationships with their customers. He is also a partner in Second Act Strategies, a bipartisan group of former public servants who share their stories of overcoming crisis with corporations, elected officials and not-for-profit organizations. Rodney served as the marketing director for Schultz Surveying and Engineering Inc. from 2010 to 2013 where he helped double the company's revenues allowing SSE to make the Inc. 500/5000 list in 2010, 2011 and 2012. Rodney was recognized by the Springfield Business Journal as the top Marketing Director in Southwest Missouri in 2011. He founded The Missouri Times; Missouri's top newspaper covering public policy and politics. He most recently finished Son of a Preacher Man about his life growing up in the home of a Baptist preacher and he co-authored a book on crisis management- The Recovering Politician's Twelve Step Program to Survive Crisis. Rodney served as a Captain in the United States Marine Corps, and enjoys outdoor activities such as running, hiking, mountain biking, and fishing. He is a member of Gideons International and attends the Sanctuary of Hope Church in Branson, Missouri. Rod is also the father of three wonderful children Callie, Emily and Will. To learn more about him, go to www.rodjetton.com.

You have subscribed to alerts for Rodney Jetton.

You have been added to Rodney Jetton's favorite list.

You can also sign-up to receive email notifications whenever Rodney Jetton releases a new book.