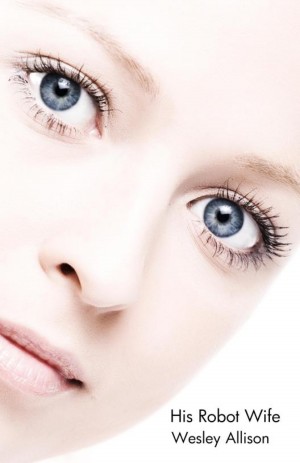 By Wesley Allison
Rated 4.50/5 based on 14 reviews
In His Robot Wife, the novella-length sequel to His Robot Girlfriend, it is the year 2037 and Mike has been married to his robot wife, Patience, for five years. Troubles are on the horizon though. Prop 22 promises to annul marriages between humans and robots. And Patience hasn’t quite been herself. Is there something wrong, or does she just need a software upgrade? More
Five years ago, Mike Smith was an unhappy man living all alone. Then he purchased a Daffodil. Far more than regular robots, his Daffodil Patience, changed his life in ways that he had never thought possible. Now it is the year 2037, and Mike and Patience have been married for five years. Retired and enjoying life, Mike thought that all his troubles were behind him, but it seems as though they are creeping up again. California Proposition 22 proposes to define a person as a biological entity, thereby annulling marriages, like Mike’s and Patience’s, performed in other states. Battle lines have been drawn, at least as far as the proponents of the bill are concerned. Now Mike must muster his own support to defeat the measure. But there is more going on than just politics. Daffodil, the robot maker, is in the news again. Hardware issues are leaving robots across the globe unable to function. Is it only an antenna issue? Now Patience herself is behaving oddly. Is there something really wrong with her, or does she just need a software upgrade?

At the age of nine, Wesley Allison discovered a love of reading in an old box of Tom Swift Jr. books. He graduated to John Carter and Tarzan and retains a fondness the works of Edgar Rice Burroughs to this day. From there, it was Heinlein and Bradbury, C.S. Lewis and C.S. Forester, many, many others, and finally Richard Adam’s Shardik and Watership Down. He started writing his own stories as he worked his way through college. Today Wes is the author of more than thirty science-fiction and fantasy books, including the popular His Robot Girlfriend. He has taught English and American History for the past 29 years in Southern Nevada where he lives with his lovely wife Victoria, and his two grown children Rebecca and John.

Also in Series: His Robot Patience

Reviews of His Robot Wife by Wesley Allison

Hey, can I get one of these? I mean, why should guys be the only ones to opt out of human hassles when it comes to intimate connections. Let's make domestic helpmeets work all the way around. Can't a gurl just feel naughty? I'd even settle for a robotic cabana boy. Not that there isn't some backlash, even in California, as we find in this satirical sci-fi riff.

(reviewed 60 days after purchase)
Gerry Goldshine reviewed on May 23, 2013

Great storyline without being puerile.

I thoroughly enjoyed "His Robot Girlfriend", and this is a good continuation.

A thoroughly enjoyable story and a very satisfactory continuation of the theme started in "His Robot Girlfriend". I quickly found that I really cared about the characters, always the sign of good writing. And, at only 99c (66p here in the UK), cheaper than many newspapers and far more life-enhancing.

His Robot Wife isn't a great piece of writing, but it's story is interesting enough to hold a reader if he's willing to wade through the text. Inspite of writing that could use some work, I commend Allison for his effort in producing and distributing a genuinely interesting story.

(reviewed 21 days after purchase)
Sebastian Barnes reviewed on June 4, 2012
(no rating)
A great follow up to His Robot Girlfriend.

Great little short story about mike and his robot wife and their battle to be accepted in society. I recommend it to all lovers of robot sci-fi!

You have subscribed to Smashwords Alerts new release notifications for Wesley Allison.