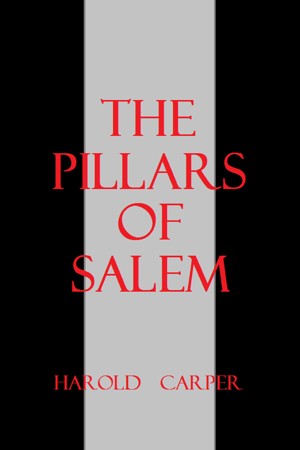 The Pillars of Salem

By Harold Carper
Rated 5.00/5 based on 1 reviews
~ 4325 words. Yedi and old Elkhanan have arrived on the agrarian world of Tikvah, whose violent and sorrowful past is revealed as they and other immigrants travel to the town of Salem. Please leave a review if you enjoy the story!
Available ebook formats: epub mobi pdf rtf lrf pdb txt html
First 20% Sample: epub mobi (Kindle) lrf more Online Reader
pdb
You set the price! USD
Buy Add to Library Give as a Gift
How gifting works
Create Widget
Tags: peace terrorism religion war jewish judaism hebrew aging alzheimers tradition death and bereavement messianic judaism
About Harold Carper

The son of ministers, he was brought up in the Assemblies of God. Once on his own, however, he asked too many questions to which there were no satisfactory answers in mainstream Christianity. After years of study and debate with armchair, Internet theologians from around the world, Harold’s searching led him to a new spiritual home among Messianic Jews and Hebraic Christians. He found the Messianic perspective more scripturally founded, more intellectually rigorous, and richer in tradition than any other, and has been a Torah-keeping Christian ever since.

Finally, Harold Carper is a Texan, by choice if not by birth. His son is a native Texan, and Harold has done his best to adopt the customs, attitudes, and mannerisms of his adopted home within the moral constraints of liberty and God’s Law. There are more guns in his house than people, and still not enough.

Elkhanan Barlow watched travelers from far-away-places. The shuttle lead by Sergeant Whitley was headed for Salem. Private Cooke was also aboard. Elkhanan (m), ahred the true tale of the pillars why they were designed/molded/erected to Yedi.
Cool book cover, great font & writing style. A very well written delightful ethnic cultural short story (book). It was fairly easy to read/follow from start/finish & never a dull moment. No grammar errors, repetitive or out of line sequence sentences. Lots of exciting scenarios, with several twists/turns & a great set of unique characters to keep track of. A very easy rating of 5 stars for this short story (book).
Thank you for the free short story (book)
Tony Parsons MSW (Washburn)

You have subscribed to alerts for Harold Carper.

You have been added to Harold Carper's favorite list.

You can also sign-up to receive email notifications whenever Harold Carper releases a new book.