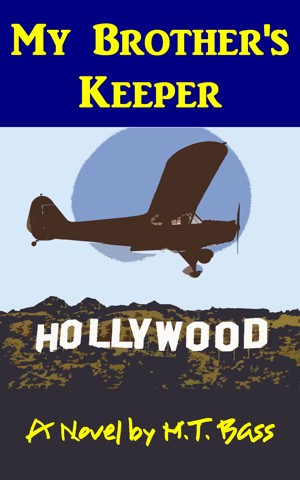 By M.T. Bass
Hollywood, 1950 -- A World War II P-51 Ace battles the police, movie makers, the mob, a former starlet ex-girlfriend, a nosy reporter and paranoid patients to find out who murdered his older brother, a prominent Beverly Hills plastic surgeon. His search will lead into the darker corners of his brother's patient files and private life he never knew existed. More
Hollywood, 1950 – Former P-51 fighter pilot A. Gavin Byrd is on location for a movie shoot, when he gets a call from the police that his older brother, a prominent Beverly Hills plastic surgeon, has been found dead on his boat. The Lieutenant in charge of the investigation is ready to close the case as a suicide from the start, but “Hawk” doesn't buy it and decides to find out what really happened for himself.

With help from a former starlet ex-girl friend, a friendly police sergeant whose life was saved in the war by his brother and a nosy Los Angeles Times reporter, Hawk's search for the truth takes him through cross-fire, dog fights and mine fields in Hollywood, Beverly Hills, Burbank and Las Vegas, and leads him into some of the darker corners of his brother's patient files and private life that he never knew existed.

M.T. Bass is a scribbler of fiction who holds fast to the notion that while victors may get to write history, novelists get to write/right reality. He lives, writes, flies and makes music in Mudcat Falls, USA.

Please visit my author's web site for more information and what I'm working on now.

You have subscribed to alerts for M.T. Bass.

You have been added to M.T. Bass's favorite list.

You can also sign-up to receive email notifications whenever M.T. Bass releases a new book.