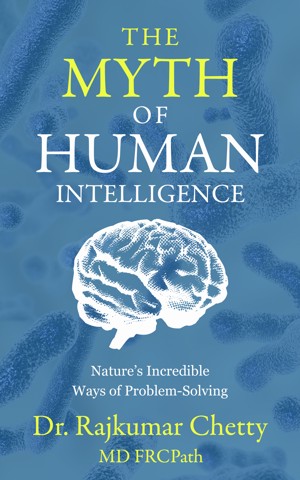 THE MYTH OF HUMAN INTELLIGENCE: NATURE'S INCREDIBLE WAYS OF PROBLEM-SOLVING

Dr. Rajkumar is a medically qualified doctor who pursued higher medical education in the United Kingdom. He has specialised in Biochemistry and Pharmaceutical Medicine and is currently working as the Head of Laboratory Services in a hospital. He is a British national though by birth he hails from India.
Dr. Rajkumar is a Fellow of the Royal College of Pathologists, United Kingdom. He is also a Fellow of the Faculty of the Pharmaceutical Medicine, The Royal College of Physicians, UK. Dr. Rajkumar is also an accredited specialist in Clinical Chemistry and Laboratory Medicine registered with the European Federation of Clinical Chemists.
Dr. Rajkumar has more than 25 years of professional experience in hospital practice, teaching, and research gained in India, United Kingdom, Saudi Arabia and UAE.
He has a deep-rooted interest in scientific philosophy and revels in thinking, writing and talking about profound worldly phenomena and their scientific basis.

The author is obviously not a medical doctor and obviously not trained in even the minimal amount of science. The book's "prelude" is a lengthy kook spew with endless Newage (rhymes with Sewage) rhetoric that appeals to the dumbest among us, and the author even gets the number of months for normal human baby gestation wrong.

It's abject lunacy, stupidity. I mean the author has no idea how television and radio antenna are different from biological insect antenna. Absolutely lunacy.

The author even gets the origins of the Earth wrong... The prelude was bad, the first sentence of the first chapter was no better. I stopped reading this stupid anti-science nonsense.

The question posed here is about the similarities between the biological world and the world of intelligence. Ultimately, it is about how order arises from seemingly "blind" forces. The book is very intruiging and easy to read. It abounds with examples of how Nature has the power to make curiously "intelligent" systems out of physical laws. For example, the way outer electrons in a molecule act as "ambassadors" and how proximity plays a role, as it does in human societies is carefully examined.
What's interesting here is an ages old question: is man really thinking, or is it a number of natural processes just playing themselves out? Same goes for the societies throughout history.
This may seem like poking blindly at the big picture, but the author presents so many examples from (mostly) biological processes. That is the value of this book. The author is obviously knowledgeable about these processes, and has given a lot of thought to their relationship to the way humans operate. It is this volume of similarities that gives one a pause to think about it.
At the end of the book, the author considers the Universe to be a sort of an "automaton". This isn't a new idea, and in fact, I am reading another book on this subject that took the subject to a much deeper level. Time permitting, I will review that book some time too.
In any case, it is known that the laws of nature seem to resemble each other as we look around. Even different phenomena seem to have common expressions, for example the wave equation for the sound and for the probability waves in quantum theory. In this book, this is taken to the level of biological and societal. I think there is more to this, and the question author asks are worth considering. Because the ultimate question is that of ourselves: are we fitting the same mold of clever works of Nature, or are we somethng divine? The author argues that the divine has no place, and actually, has no need if we're to look for the answer.
Whether this is true or not, perhaps the future will tell. In the meantime, this was an intruging piece to read.

You have subscribed to alerts for Rajkumar Chetty.

You have been added to Rajkumar Chetty's favorite list.

You can also sign-up to receive email notifications whenever Rajkumar Chetty releases a new book.