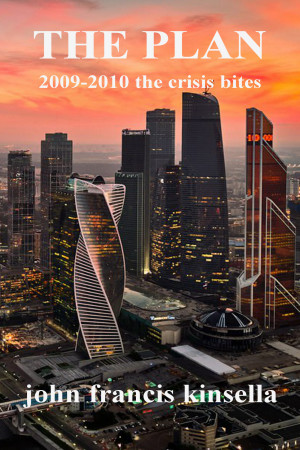 By John Francis Kinsella
The Plan is the third part of the Turning Point trilogy 2009-2010, the crisis bites More
With the euphoria of the American elections past and the world struggling to come to grips with the financial panic that seem about to overwhelm it Pat O'Connelly returns to dublin. The contrast between the city's bleak landscape and the bright skies of Miami could not have been starker. As his taxi made its way through the city centre, the Christmas lights, which still decorated the streets, gave off a strange glare in the early evening fog. The driver sniffed and mumbled that they 'would do little feckin good for the working man, with jobs melting away like good Irish butter on toast'.
The millions of twinkling lights that decorated O'Connell made a sad contrast with the gloomy atmosphere that had descended on the city, dampening its usual festive spirit. After two decades of prosperity Dubliners had forgotten what an economic crisis was and were desperately trying to come to terms with the calamity that had struck them.
Download: epub mobi (Kindle) pdf more Online Reader
rtf lrf pdb txt
Price: Free! USD
Add to Library
Create Widget
Tags: city of london bankers crash of 2008 financial collapse
About John Francis Kinsella

John Kinsella lives in France where he spends his time between Paris and the Basque Country, that is whenever he is not travelling further afield in search of experience and new ideas. He has written twelve novels and translated two of his books to French as well as seven other books on archaeology, architecture, biographies and religion from French and Spanish into English.
In addition he has authored An Introduction to Early 20th Century Chinese Literature, this is in a pdf format as it is difficult to transform it into a mobi or epub format and can be found on Amazon.
Contact mail:
johnfranciskinsella@gmail.com

You have subscribed to alerts for John Francis Kinsella.

You have been added to John Francis Kinsella's favorite list.

You can also sign-up to receive email notifications whenever John Francis Kinsella releases a new book.