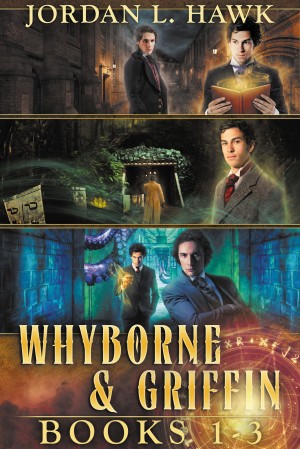 Widdershins: A reclusive scholar. A private detective. And a book of spells that could destroy the world.

When handsome ex-Pinkerton Griffin Flaherty approaches Dr. Percival Endicott Whyborne to translate a mysterious book, Whyborne wants to finish the job and get rid of Griffin as quickly as possible. Instead, he’s drawn into the hunt for a merciless cult bent on resurrecting an evil necromancer from the dead...and finds himself falling in love with the impertinent detective. But will Griffin’s secrets cost Whyborne not only his heart but his life?

Threshold: Whyborne’s railroad tycoon father hires Griffin to investigate mysterious events at a coal mine. The two men and their friend Christine must travel to Threshold Mountain, a place of dark legend even before the mine burrowed into its heart. In a town where friends become enemies and horror lurks behind a human mask, Whyborne can’t afford to trust anything—including his own heart.

Stormhaven: When one of Whyborne’s colleagues is accused of murdering a man, Whyborne and Griffin are on the case. Along with their friend Christine, the two men become ensnared in a sinister web of conspiracy, magic, and murder. But first, they must survive their greatest challenge yet: a visit from Griffin’s family. 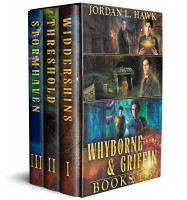 Reviews of Whyborne and Griffin, Books 1-3 by Jordan L. Hawk

This series is so awesome! I was a little leery at first; I had downloaded "Widdershins" as a free read; as my experience with some of these offerings has left some thing to be desired, I read with caution, withholding any comments until the end. Well, I was greatly surprised to find myself caught up in the story, and then needing to see the end. I came to Smashwords and purchased the sets as well as "Maelstrom". Just awesome.

The characters have come to life for me... and I can't wait for the next installment. You need to read these...they are magnificent!!!

Can only agree with review form Thianna D, this is so good. Going with Billy Idol here: More, more, more!

I rec’d these three books on Facebook as I reviewed them. I’m posting those reviews here almost in their entirety.

Widdershins
5 stars! I'm tellin' ya! You have to read this book. Suspense, mystery, M/M erotic romance, takes place in a creepy museum with an amazing cast of characters. A phililogist (Whyborne) who is shy and stutters and grabs your attention right off, his love interest (Griffin) who has his own sordid past and yet is a an amazing character, Christine the lone female doc who is trying to make it in a man's world and is Whyborne's friend, family secrets, a brotherhood cult, an evil genius brought back from the dead, and half human creatures that suck the blood out of their victims to survive.

Threshold
Another rec! This time Book #2 Threshold of the Whyborne & Griffin series. Definitely 5 stars. Whyborne and Griffin, along with their feisty friend Catherine are in for a bit of a shock when they travel to Threshold to do a little work for Whyborne's father. Seems his mine is having 'problems'. These problems turn out to be creatures from outer space that look like HUGE crustaceans and spend their time cutting people apart and sewing them back together in unlikely combinations. Added to their fun is an ex-lover of Griffin's who isn't happy with Griffin & Whyborne being together, jealousy on poor Whyborne's part because the man's gorgeous, flirty saloon girls who adore Whyborne, people changing personalities overnight, people disappearing and reappearing as zombie-esque creatures, Pinkertons, a mine, creepy-crawlies, the chance to travel to other galaxies in a bodyless state, and Griffin and Whyborne having to hide their relationship by sleeping in different beds? And why aren't you reading it yet?

Stormhaven
Whyborne & Griffin, best series I've read since I found Falls Chance Ranch last June...and in a completely different way. So, a HUGE 5 stars to Stormhaven, book 3. So, what happens in Stormhaven that makes it worth reading? Well, while in the other two books we had an evil sorcerer returned from the dead and curious aliens who had no respect for humanity, in this book we've got a lunatic asylum and a dweller in the deep (gotta love fish men). So, after a murder most foul which an associate of Whyborne's has been accused, Griffin takes the case, only to have to step into Stormhaven Lunatic Asylum to interview the accused. Not only does the asylum bring back memories he wishes were long dead, but he runs into the man who declared him insane. It's a race against time as Whyborne fights off dreams that are plaguing him from the dweller and Griffin tries to put on a happy front for his visiting family even as they work to try and prove Alan's innocence. For once, all their work may not be enough. Great story, fantastic twist at the end, men in dressing gowns, girls who hear voices, an annoyed Christine, a decision that must be made, things that seem as they are not, lots of Griffin/Whyborne loving, and new magic spells to explore. May 6th when #4 comes out cannot come soon enough.

Read this series! It's SO AMAZING!