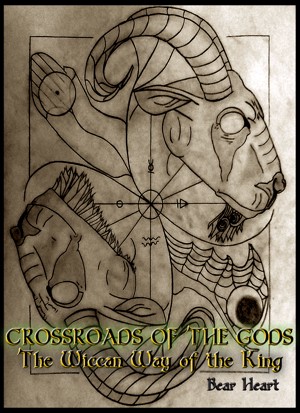 Crossroads of the Gods: The Wiccan Way of the King

Bear Heart is a 3rd Degree High Priest of Wicca and full inheritor of the Crossroads of the Horned God tradition of European sorcery. A practicing magician of ritual high magic for over 20 years, he maintains membership in a number of other magical and secret societies.

Reviews of Crossroads of the Gods: The Wiccan Way of the King by Bear Heart

This is powerful book and not to be taken lightly, the exercises written are dangerous and should not be practiced without a proper timeline/patience or otherwise with a mentor, speaking of the initiation which is the last section of the book, it will be very foolish for anyone to go through such an initiation without a mentor of some sort even if that mentor is an astral mentor, the rest of the book however could be practiced throughout at least a year and the energy workings are very powerful and cannot be found anywhere else.
Clearly the path itself laid out in the book has some kind of protection so that no one would start unless really called, I personally don't encourage any dabbler or similar to practice the serious rituals laid out in the book but the basic invoking and the energy workings can be done as I said at least a year to see if you are called. Actually it is a surprise to see such a book I think it's rare. The writing style is simple and empty of useless fancy words and straight to the point, however I wished that Bear heart wrote more personal accounts on his trials of initiation to give more idea to the uninitiated about how dangerous this path is, overall good book even if for the energy workings themselves worth it.

(reviewed the day of purchase)
Loshardé terran dweller reviewed on May 14, 2016

we are the protectors of our realm and all who dwell.. support the facebook page and upload bearheart to youtube.... for all whom fight the g.o.o.d.s you better dig deep .... from here to the imperishable crown from the house of mars to shed of rebellion till our last breath we fight to destroy and remove entities . Thorn ....

(reviewed 14 days after purchase)
Bob Bob, Sr reviewed on Feb. 14, 2016
(no rating)
Hail Beaheart, a real modern day Champion and Warrior in every aspect of the word!

Genius to say the least. The rituals and meditations meant for us to evolve. It's serious. Bearheart graciously shares the real SECRETS. I mean really. This book can't even be published its so genuine. We all know we have something more in us, this is how we BECOME. For those who read it and think oh serpents, horns, devil oh my...... FOLLY!!! Take into consideration the life this man has endured to share this information for the sake of humanity...again.... That knot in your gut is FEAR .... Fear of truth, change and the unknown. Because we have been rengineered with astral mechanizms to keep us dumb and docile It's time to ferociously tear that shit off us!

LOVE UNCLE BEARHEART! This is an incredible manual for the serious magus. I am hoping to purchase the next book as soon as it is available. Yes, I am a fan of Uncle Bearheart but once you read this book, YOU will be too.

(reviewed 27 days after purchase)
Love Lee reviewed on Sep. 10, 2014
(no rating)
Bear Heart, the brave courageous magician, walks, breaths and battles his imposers and most importantly evil and shares his intimate experience with his collected knowledge of magick and ancient practices. Impressive and strong rituals for what we thought to be evil if we do not understand it and use it properly as he does. It's truth at its most raw, sexual and mysterious.  If you follow Bear Heart you know he will not lead you to a road with vulnerable sleeping sheep but of the free wise wolves and your birthright of magick, protection, fury, sex,  and love.  Thank you Bear Heart

You have subscribed to alerts for Bear Heart.

You have been added to Bear Heart's favorite list.

You can also sign-up to receive email notifications whenever Bear Heart releases a new book.