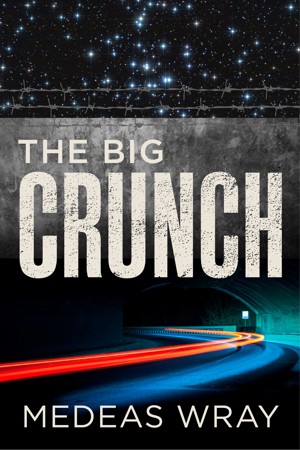 Amusing, moving, fast-paced new adult fiction with strong language in places, dark themes, shady deeds. Malkie is a computer games designer with a life spiralling into free-fall down down to computer crashes, a car mysteriously totalled and a failing marriage. Ian, his ex-hacker assistant has his own problems. Like having a stiff in the living room and working with Malkie. What could go right? More
Set In Leeds just a few years into the 21st century as Leeds United start to slip down the league tables, The Big Crunch is a fast-paced 70,000 word novel with strong language in places, dark themes and much humour, despite all that.

There are dark deeds and skull-duggery afoot somewhere on the fringes of Malkie's life. He's a computer graphics designer, an inventor of video games who's newly into astronomy, habitually into alcohol and struggling to survive on a planet no bigger than a speck of dandruff in a coal-mine in universal terms, as his life goes into free-fall and the big crunch of the title occurs at all levels - from computer crashes to a car being mysteriously totalled and a failing marriage - assisted by a full-time geek called Ian, an ex-hacker with a couple of murky associates, a passion for football and a flat at the low-rent end of the neighbourhood where Malkie mis-spends a few of his nights.

A new writer with a passion for urban noir fiction and with leanings towards sci-fi and the paranormal who leads a mysterious life, skulking in out of the way places to uncover stories that are a little off-centre, exploring not just the dark side but the many facets of the human experience - with much humour in places.

Down To Zero is the first in a series, set in London in 2018 and beyond, featuring seasoned murder-investigators Mallory Vine and Bob Dario as they struggle to bring down two serial-killers and start to realise that the paranormal is at work, despite all arguments to the contrary. The Big Crunch is a one-off novel, fast-paced and grungy, set in Leeds at the beginning of the 21st century when you could still smoke in the pubs, when Leeds United were slipping down the league tables and IT was here to stay. Things could only get better - or could they? Other short stories have different time-frames - one is a tale of medieval misdeeds set against a backcloth of social and political upheaval as a motley crew of stalwarts attempt to enjoy their lives - and survive. Due for publication with a couple of shorter works, one a ghost-story in the near-ish future.

The writings of Medeas Wray are hard to pin down. Seems the category 'Mash-Up' was tailor-made for them. If you like the work of Iain Banks, Richard Condon, George MacDonald Fraser, William Gibson (all of them, sadly dead) - you may like Medeas Wray's.

The author is currently working on the second (and possibly third) in a series following on from Down To Zero. Still learning, still travelling, still breathing - and struggling to survive on a planet no bigger than a speck of dandruff in universal terms.

Reviews of The Big Crunch by Medeas Wray

You have subscribed to Smashwords Alerts new release notifications for Medeas Wray.

You have been added to Medeas Wray's favorite list.

You can also sign-up to receive email notifications whenever Medeas Wray releases a new book.