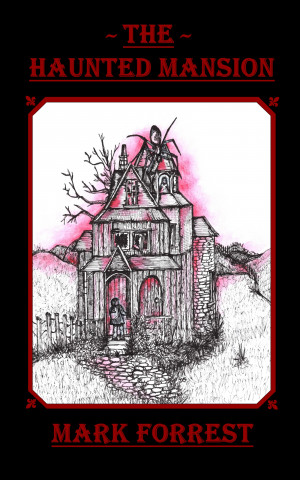 By Mark Forrest
A spin-tingling adventure in which Charlotte Entwhistle, armed only with a flask of hot chocolate and a book on phantoms and monsters, sets out to rid a mansion of all its ghostly occupants. Yet on the way, Charlotte uncovers a diabolically evil plan, as well as the strangest ghost hunting colleague ever. More
The year is 1860. Charlotte lives with her parents in the shadow of their only possession, the Entwhistle Mansion, a huge building doomed to crumble and rot as it is overflowing with hundreds of ghosts, spirits and phantoms.
Armed only with the book “The Scientific Analysis of Ghosts, Beasties and Bogles” by the renowned ghost hunter A.E.Cronin, Charlotte decides to rid the mansion of its occupants, so allowing her mother and father to sell the cursed building. But once inside she finds far more than just a few unfortunate spirits.
With every room haunted, a mad scientist, a giant spider and a crazed monster stalking the corridors, Charlotte’s courage will be tested to breaking point. Yet aided by the strangest ghost hunting colleague ever, she just might have a chance of completing her mission and escaping the mansion with her life.
Filled with thrills, scares and a fair amount of hot chocolate, are you brave enough to enter the Entwhistle Mansion?
Download: epub mobi (Kindle) pdf more Online Reader
lrf pdb txt
Price: Free! USD
Add to Library
Create Widget
Tags: haunted house ghost story fantasy adventure ghost hunting scary and funny ghosts fiction ghosts and monsters hunting ghosts
About Mark Forrest

Mark Forrest was born in East London in 1970 and grew up in Dagenham before moving to the Essex heartland with his wife and daughters. After a brief stint working in the public library service he ended up in broadcast television where he is currently still working.
Having spent years writing for his own pleasure, Mark finally entered the realm of self-publishing under his own banner of the Ministry of Anxiety, with the first part of the Charlotte Entwhistle trilogy, The Haunted Mansion.
The Entwhistle trilogy actually started several years ago in a small Cornish pub and aided by his wife, abetted by his children and interrupted by the need to earn money, plant cucamelons and battle the occasional Merman, the first book now exists.

You have subscribed to alerts for Mark Forrest.

You have been added to Mark Forrest's favorite list.

You can also sign-up to receive email notifications whenever Mark Forrest releases a new book.