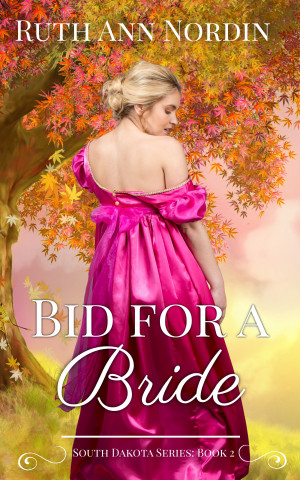 Bid for a Bride

Rated 4.64/5 based on 22 reviews
Lucy finds out the man she just married already has a wife. The preacher intervenes and helps her annul the marriage, but he’s aware that Lucy’s week with her bigamist husband might have resulted in a pregnancy. To protect her reputation, he asks Brian Evans to marry her. Brian jumps at the chance and proposes to her. But will she love him as he hopes or will he only be her convenient husband? More
After Loving Eliza, John and Eliza adopt a blind boy named Brian who was abandoned by his father. Bid for a Bride is Brian’s romance. The story begins in the quiet South Dakota town where Brian lives.

Lucy finds out the man she just married already has a wife, and what’s worse is that he’s trying to sell her to the highest bidder. The preacher intervenes and helps her annul her marriage, but he’s aware that Lucy’s week with her bigamist husband might have resulted in a pregnancy. To protect her reputation, he asks Brian Evans to marry her. Brian jumps at the chance and proposes to her. Seeing no other option, Lucy agrees. But will Brian have the marriage based on love that he longs for or will he always be Lucy’s convenient husband?

About the Series: South Dakota Series

These romances feature a hero who is either mute, blind, or adopted.

Reviews of Bid for a Bride by Ruth Ann Nordin

Ruth Ann Nordin, definetly among my favorite authors, love her books simplicity and morals Adore all her characters,good and bad.She has a gift for turning a normal situation magical.
She writes characters you will remember for life.

I loved the story about Eliza and was glad to have another chance to read about her. This story was an interesting emotional journey, containing both the loving and romantic side as well as the darker side held by both Lucy's twin and Ben's father. Ben is a very interesting character and I would have enjoyed reading more about the story about when Eliza and John first find him as a boy and the trials they had to endure with him being blind and John being mute. It would make a good story on its own.

I have read many of Ruth Ann Nordin's books and I and my mother both love them. Many of the book tie into each other in really interesting ways. This is a really great story I've read it 5 times and the way it ties in to loving eliza is really cool having Brian as Eliza's adoptive son.I can't wait for more of these great books.

Ruth Ann Nordin is without a doubt a genius with her words! I absolutely loved this book as I've loved all the other books I've read for her. I love the fact that Eliza adopted Brian, it was beautifully written. Will definately be reading more of her books!

Ruth Ann Nordin's "Bid For a Bride" starts with Lucy, the heroine, being "auctioned" off to the highest bidder by her bigamist husband. Except that there isn't really an auction; he just dumps her off in a little town outside Sioux Falls.

Conveniently enough, the circuit judge is in town that day and can write an annulment for Lucy. Conveniently enough, there's a young man named Brian who's available to marry: none of the other women in town are interested, because he's blind. None of the men are interested in Lucy, because she might be carrying another man's child ... and Brian doesn't care, because he's adopted.

The story carries on from there. Brian and Lucy make a nice life together with very little tension in the tale until toward the end of the book, when Lucy's sister comes to town.

I don't want to deliver spoilers, so I'll leave it at that. The book went along quickly and was a nice enough read. There were several homophone errors (e.g., "broach" where "brooch" was meant, and likewise "stationary" for "stationery") that bothered me from an editorial perspective.

She's an addicting writer, readers beware, once you start, you will have to read them all!

(reviewed the day of purchase)
Mave Priestley reviewed on Dec. 26, 2011

Found it intriguing. And yes I enjoyed it. Though would have preferred a shorter romantic novel. Still it was good, first time I have read one of her books, and would consider reading another.