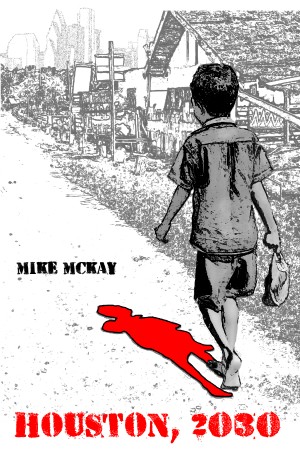 By Mike McKay
Rated 4.67/5 based on 3 reviews
It has been twenty-four years since the Peak Oil, and fourteen – since the world-wide economic collapse (and the Peak Everything.) No, there are no nuclear fall-outs and no zombies on the streets! The Civilization lives on. But: it is a very strange new world. In some ways – similar, and in some ways – totally different from our own. What does the future hold for us? More
This novel is both a classic police detective and a social science fiction. Or, you may call it a dystopian warning. As the name suggests, the action happens in not-so-distant future. The detective part is thrilling: an FBI Special Agent follows a serial killer case. In the science fiction part, the reader will not find any robots, or flying cars, or super-computers. The end of our world does not come from zombies raised from the graves (although one “zombie” is positively present.) There are no viruses that kill a person in under thirty seconds (although, there are viruses that positively can kill.) There are no continent-size volcanoes, asteroid showers and aliens from the outer space, and no Noah's Flood (although one flood is positively present, but very local.) Does not sound too scary to be a good read? Well, the global catastrophe described in the book is presently on-going! The world created by the author's imagination is remarkably similar and at the same time - remarkably dissimilar to our own, and yet – believable.
Download: epub mobi (Kindle) pdf more Online Reader
lrf pdb txt
Price: Free! USD
Add to Library
Create Widget
Tags: serial killer peak oil covert operations apocalypse adventures dystopian climate change detective fbi collapse of the united states
About Mike McKay
Read Mike McKay's Smashwords Interview
Learn more about Mike McKay

The major failing is the author's non-native use of language; it takes some getting used to the frequent incorrect word use and grammar, perhaps feeling like a Russian wrote it.

Frankly, the world in the book is truly disturbing.

If you read zombie SF, or even some total die-off epidemic SF, it does not touch you that much. It could be very scary sometimes, but at the back of your mind it keeps telling you: no worries, it's not possible.

Not with this one. The details are so realistic, one may think author has gone 15 years to the future to see for himself.

(reviewed 5 months after purchase)
pbowen reviewed on on April 13, 2014

The Hitchhiker's Guide to the Post-Apocalypse World.

A set-up you may expect from the present-day police detective or police procedural fiction. The main character, Mark, is an FBI agent. He honestly admits that he is no Sherlock Holmes. At some point, he even calls himself a dull, plain-vanilla government agency bureaucrat. In his free time, Mark likes to get cozy with a good history book, maybe accompanied with a beer or two. Not a technology geek either: he is a behavioral psychologist by a degree, and is not very good at making things work. He is still at the twelfth page of that Hawking's baby universe book, finding it difficult to progress any further. When Mark's teenage daughter at the synthetic petrol plant calculates the chemical weights, or tells him about a Tuboscope X-ray machine she is using, Mark just whistles: “Wow! How come she is so good with those techno things!”

The main characters are very well developed, if not a little bit static, and even the supporting characters all got their distinctive features, precise descriptions, and even speech accents. Yes, people do speak differently, and an Indian accent of the vegetable theft is different from from the private school British English of Deputy Kim, which, in turn is different from the Southern dialect of the barefoot cobbler in the slum. Perhaps, the author uses this a bit too much for my personal liking, and some dialogs are not too easy to read, in a mark-twainsh sort of way.

The novel starts with a crime scene. Four policemen and one FBI agent routinely go through the motions. No excitement and no danger. Just some normal, routine work. Besides, this is not the first crime scene of 'their' serial killer and probably – it will not be the last. For the serial killing investigation, I will go no further. It is a detective story, after all, and I do not want to spoil you the mystery. In the good tradition of the genre, the reader will not know the killer identity till the very end.

We are introduced to the expected set of characters for a police detective: a confident Sergeant-Investigator with a Slavic accent, a witty female CSI,a and a diligent local Beat Deputy. It could be the CSI Miami or the Bones TV series. The only thing: in Mike McKay's book, it is all 'for real.' No huge semi-transparent LCD screens with out-of-our-galaxy computer simulator programs. Hey, if you need to identify a fingerprint, you don't just stick it into the magic computer application that runs for ten seconds and says: “Ta-da! Match found!” You got to count the 'loops' and the 'deltas' first, and not every fingerprint is in the database either. As for the DNA test, first you have to beg the Station Chief to let you open yet another DNA kit. The budgets are tight nowadays.

It is exactly the realism that attracts in the novel. The events are neatly beaded over the detective plot, each with totally believable and realistic details. It is evident, that the author has done his research right. At some point, a CSI cracks the Pentagon database for some information he is not supposed to know. It is not a Hollywood cyber-thriller Mission Impossible break-in, but just a clever Python script, designed during the off-duty hours. Tom the CSI even explains to his colleagues the security 'exploit' and the 'human-engineering methods' he is using (I wander if the Pentagon is plugging that – right now!) The author does not underestimate the reader's intelligence. Many things are just mentioned, and not described in miniscule details, like in Clancy's novels. A singe mention of Quebec here and there, literally two short sentences – and suddenly, you know how Canada looks like in 2030!

So, how the world looks like in 2030? And this is a wonderful part of the book, which makes it stand a bit aside from the typical post-Apocalypse fiction. Instead of telling to the dear reader, page after page, how the government looks like, how the trout is caught and smoked, how the spent gun cartridges are re-loaded, and how the tobacco is grown in the post-oil America, the FBI agent simply goes around and asks his questions. That is what he does for living: he is busy. He has a serial killer to catch! The investigation brings Marks through a number of places – from a highway saloon to a landfill, and in front of many people, with all the walks of life: from a PhD chemical engineer, who runs his own petrochemical business, to a landfill rag-picker, and an amputee beggar.

OK, the rag-picker in the post-Apocalypse world is readily imaginable. But: the petrochemical business? Has the author just placed his story after the Apocalypse? Fear not, dear reader. The post-Apocalypse world, as McKay imagines it, is not what you think. There are still cars and buses (a lot less). Bicycles (a lot more). Mobile phones (and yes, even the amputee beggar can have one!) The TV and radio stations are still operating (and Mark's son believes that they are getting better!) The fast food, as it used to be for three thousand years, before the MacDonald's and Wendy's: all these taco and noodle vendors, happily rolling their carts to the awaiting hungry customers (even at the landfill.) Computers and electronics are being salvaged and repaired. New bicycles are still produced. New inventions are being implemented. The Internet has as much stuff as ever. The world struggles, but works. But, the world of Mike McKay is not a bucolic half-Amish, half-Hippie Utopia either. The people have real little problems: how to get those school uniforms for the kids, how to empty that backyard latrine, where to buy salt and coffee, what to do if somebody keeps stealing veggies from your back yard? What do we do, if there is a hurricane? What do we do, if our fourteen-year-old daughter desperately wants a tattoo?

On the novel's oversights, I only can mention one thing. The author does not explain from where the Army the the Navy get all this equipment, uniforms and ammunition they are using (and even selling to the civilians illegally.) If there are large manufacturing plants still someplace around, they are not directly mentioned or explained in the text.

But, enough for the review. If you are still interested – read the novel. You will not be disappointed.

You have subscribed to alerts for Mike McKay.

You have been added to Mike McKay's favorite list.

You can also sign-up to receive email notifications whenever Mike McKay releases a new book.