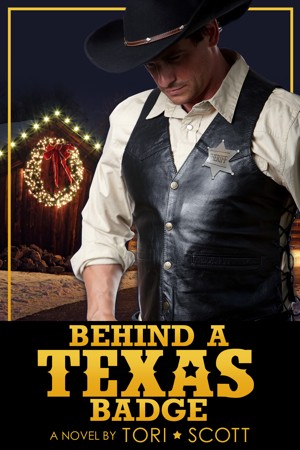 Behind a Texas Badge

By Tori Scott
Shelby Campbell has a secret she's kept from her friends and her newly found family. She's a victim of domestic abuse, hiding from her psychopathic ex-husband.

Tommy Bell is the sheriff of Morris Springs and it's his job to keep Shelby safe. When Shelby leaves the protection of the Triple S to save her son, Tommy has to find her before it's too late. More
Shelby Campbell has a secret she's kept from her friends and her newly found family. She's a victim of domestic abuse, hiding from her psychopathic ex-husband. She hopes to leave her past--and her ex--behind when she moves to Morris Springs and changes her name. She thinks she's left no trail for him to follow, but she quickly discovers her ex is more resourceful than she gave him credit for.

Tommy Bell is the sheriff of Morris Springs and it's his job to keep Shelby safe. He has no idea how determined her ex-husband is to make sure that if he can't have Shelby, no one can. When Shelby leaves the protection of the Triple S to save her son, Tommy has to find her, before it's too late.
Available ebook formats: epub mobi pdf rtf lrf pdb txt html
First 20% Sample: epub mobi (Kindle) lrf more Online Reader
pdb
Price: $3.99 USD
Buy Add to Library Give as a Gift
How gifting works
Create Widget
Tags: texas christmas therapy blizzard texas romance sheriff hero cowboy and western romance domestic abuse survival lone star cowboys series
About Tori Scott

About the Series: Lone Star Cowboys

The town of Morris Springs, Texas, brings together some unlikely friends who make the town their home and band together to create a haven for broken cowboys, wanna be rodeo stars, and special needs children at the Triple S Ranch and Hippotherapy Center. There, the friends forge a bond stronger than blood and learn they are stronger than they think.

Reviews of Behind a Texas Badge by Tori Scott

You have subscribed to alerts for Tori Scott.