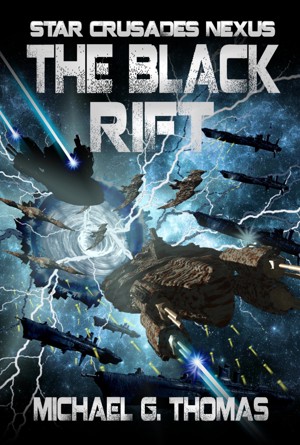 The Prophecy of Fire has revealed itself in the shape of the great machine enemy, the Biomechs. Their limitless numbers of ships, soldiers, and creatures are ready for the war to end wars. Each of them waits patiently for their chance to come through the unstable Black Rift under the command of their remarkable new ally. A glimpse of this world-ending force has already been seen, and it has led to a series of disasters on many worlds. Even the stalwart defenders of humanity begin to look inwards, and for a leader that can save them from the fury of the machines. Few doubt the Biomechs’ resolve, but there is now little remaining to guard the ancient gateway to the domain of the enemy.

As the allies wait for the arrival of the hated machines, they are forced to defend the burned out worlds of Eos, Spascia, and Helios Prime. The outcast Biomechs of the Nexus hear the call of their kin, and hurl themselves at every ship and soldier in a final bloody assault that could end the war in a matter of days. The allied forces of six different races cling to their trenches and earthworks in massive sieges, while in space the fleet fights bloody engagements that leaves hundreds of ships in ruins.
The inhabitants of the Nexus finally realize that the Prophecy of Fire was true, and when the Black Rift finally opens, there might be little left for the few remaining warriors to fight for.

Michael G. Thomas, is a writer, martial artist and military historian. He has written books on European martial arts and military history as well as Zombie Survival books and fiction. He is the co-founder of the prestigious Academy of Historical Fencing that teaches traditional armed and unarmed European martial arts. His specialist subject areas are teaching the use of the medieval two handed longsword and the German long knife in both the UK and other parts of Europe.

He academic background is as varied as his writing with degrees in Computing, Classical Studies and Machine Learning. In recent years he has undertaken substantial research in the fields of machine learning and artificial intelligence as well as Ancient Greek and Byzantine military history.

Michael is currently completing his Champions of the Apocalypse Series and Star Crusades science fiction series.

You have subscribed to alerts for Michael G. Thomas.

You have been added to Michael G. Thomas's favorite list.

You can also sign-up to receive email notifications whenever Michael G. Thomas releases a new book.