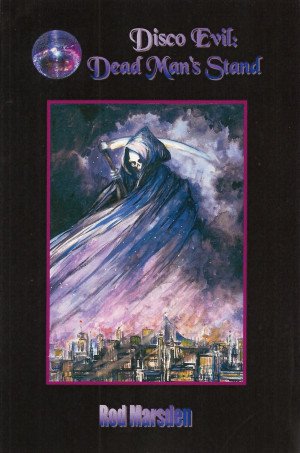 By Rod Marsden
When Paul becomes a vampire, he brings a new technique in curing people of bad manners. He will seek out the destroyers of "make love, not war" and drink their blood. In many cities of the world, he recruits from the living to aid him in his great work. As a walking corpse, he makes his stand - a dead man's stand.

Rod Marsden was born in Sydney but did most of his growing up while on holidays in the northern NSW fishing village of Iluka where his mom, May, and dad, Chic (short for Charles), taught him how to fish. It was on these fishing trips he discovered through his mom, he actually did like to read and wanted, one day, to be a writer.
Way back in the ‘70s, Rod visited the USA but never got to meet his heroes Ray Bradbury, Robert Silverberg, Leonard Nimoy, Jimmy Doohan, George Takei, and the lovely Nichelle Nichols. He also never got to meet his all time favorite members of the Marvel Comics bullpen Stan Lee, Jack Kirby and Gene Colan.
It can be said that USA artist Gene Colan’s renderings of the sexy, slinky Black Widow made him wonder about becoming an artist.
Rod was first attracted to vampires (femme fatales of course) by the British Hammer series of horror movies, which included Vampire Lovers and To Love a Vampire, and by certain early Universal films such as the original Bela Lugosi version of Dracula.
Rod has a BA in Liberal Studies, a Graduate Diploma in Education and a Master of Arts in Professional Writing.
Rod’s short stories have been published in Australia (Small Suburban Crimes anthology), New Zealand (Australian Animals are Smarter than Jack 2 anthology), England (Voyage magazine), Russia (Fellow Traveler magazine) and the USA (Cats Do it Better than People anthology, Night to Dawn magazine, Detective Mystery Stories magazine). Then there is the more recent NTD book, Undead Reb Down Under Tales.
He lives on the south coast of NSW, Australia.

You have subscribed to alerts for Rod Marsden.

You have been added to Rod Marsden's favorite list.

You can also sign-up to receive email notifications whenever Rod Marsden releases a new book.