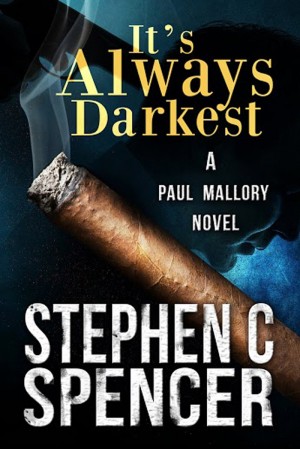 By Stephen C. Spencer
Rated 5.00/5 based on 1 review
When sportswriter Paul Mallory's insatiable curiosity--and a propensity for showing off--gets the better of him one fine day, he has to leave his old life (and young girlfriend) behind to take on a lucrative new job; a job he never really wanted in the first place.

Whatever he does, he'll never be the same again... More
Small-town sportswriter Paul Mallory doesn't need much to keep him happy: Red Stripe beer, H. Upmann cigars, and enough money to put down a few bets at the track every so often will do the trick nicely. He likes his quiet, undemanding life in upstate New York, and he really likes his quiet and undemanding girlfriend Pam. Maybe he even loves her.

What Paul doesn't like is travel, complications, and most of all, responsibility for the welfare of others. But when his insatiable curiosity—along with a propensity for showing off—gets the better of him one fine June day, he has to leave his old life (and Pam) behind to take on a lucrative new job; a job he never really wanted in the first place.

Then, on his very first assignment with the mysterious Cramer Press Syndicate, Mallory immediately finds himself in the spotlight at a Russian handball tournament and must decide whether to become personally involved in the biggest story he's ever covered—putting both his career and his life on the line in the process.

I’m always more than a little diffident when it comes to either talking or writing about myself. As Winston Churchill is alleged to have said about Clement Attlee, I’m a modest man with much to be modest about. (That rhetorical device is called a paraprosdokian, should you want to either impress or alienate your friends one of these fine days. But you don’t have to be impressed with me: I had to look it up. Until just now, I’d always thought it meant a fear of the number thirteen.)

I was born and raised in West Palm Beach, Florida, the oldest of three boys. Soon after graduating from high school, I followed in my father’s footsteps and joined the Navy, where, after acing every aptitude test they had, I naturally decided to specialize in laundry and dry cleaning. Make of that what you will. I spent seven years aboard two aircraft carriers, seeing the world—or at least twelve countries’ worth of it. Monaco—you’re not going to believe this, but they actually have a casino there—was far and away my favorite liberty port, with Málaga/Torremolinos on Spain’s Costa del Sol a respectable second. (That they too have a casino I took a fair bit of money away from is purely coincidental!)

But it wasn’t until 2003 that I overachieved for the first time in my existence by marrying my wife, Melissa. More than anybody else, she’s the one who’s made it possible for me to indulge this little writing escapade of mine—and she, along with two of the greatest kids in recent memory, Kaitlyn and Evan, make all the work worthwhile.

I’ve been writing for as long as I can recall. The way I remember it, my first story (this would have been in the fourth or fifth grade) was about a bumbling explorer who crossed the Atlantic Ocean, losing two of his three ships, half the crew’s food and water supply, and his color television set en route before sailing triumphantly into Ohio’s state capital on 12 October 1492 and christening it Columbus. (He had wanted to use his Spanish name, Colón, but the marketing people shot him down.)

These same elements—highly sophisticated humor and a well-intentioned hero who never gives up—are present (I hope!) in my Paul D. Mallory stories of today. You could say that I haven’t come very far in all that time, and I wouldn’t argue with you.

But I also wouldn’t care. I’m enjoying the trip far too much to rush through it. Be seeing you!

Update as of 17 December 2014 from Melissa Spencer (Steve's wife): Steve passed away peacefully at home 6 December 2014 after a 2 year battle with brain cancer. Writing was Steve's dream, and I continue to keep his memory alive through Paul Mallory. When you read Paul's adventures, know that a piece of that character is taken from Steve himself through his 58 years of adventure.

Reviews of It's Always Darkest by Stephen C. Spencer

A good thriller, some unexpected twists

You have subscribed to Smashwords Alerts new release notifications for Stephen C. Spencer.

You have been added to Stephen C. Spencer's favorite list.

You can also sign-up to receive email notifications whenever Stephen C. Spencer releases a new book.