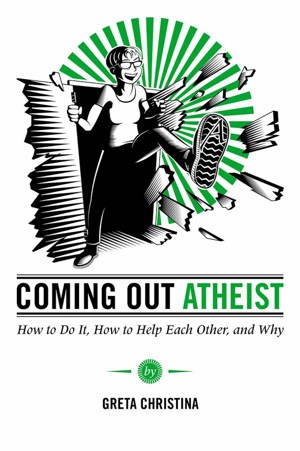 Coming Out Atheist: How to Do it, How to Help Each Other, and Why

In this compassionate, friendly, down-to-earth how-to guide, popular author and blogger Greta Christina ("Why Are You Atheists So Angry? 99 Things That Piss Off the Godless") offers concrete strategies and guiding philosophies for coming out as an atheist. Based on hundreds of coming-out stories, the book offers a map of the territory atheists are likely to encounter -- and ideas on how to pick the path that's best for you.

For atheists who are already out, it gives practical ideas on how to help others join you in the sunlight. And for atheists who are on the fence, it offers guidance on making that decision -- and gentle encouragement to take that step.

Inspiring and realistic, kind and powerful, "Coming Out Atheist" is the much-needed guidebook atheists have been waiting for.

Author Greta Christina is donating 10% of her income from this book to atheist organizations, charities, and projects.

"Witty, wise, helpful, and humane, this clear and engaging book is most timely. Coming Out Atheist is a great resource for the many Americans out there who have rejected religious faith and are moving towards embracing, acknowledging, and proclaiming their atheism."
-Phil Zuckerman, Ph.D., author of "Faith No More: Why People Reject Religion" and "Society Without God: What the Least Religious Nations Can Tell Us About Contentment"

"Old and new atheists alike will find this book invaluable as a road map through the often murky waters of coming out as a nonbeliever. As an out atheist, I was struck by how much I learned about the coming out process and its intricacies. There is no doubt that it has made me a better advocate and voice in the movement. BUY THIS BOOK IT'S AMAZEBANANAS!"
-Lauren Lane, Skepticon Co-Founder

"Greta Christina's guide to 'Coming Out Atheist' is chock-full of useful ideas; but above all it is wise and compassionate."
-Alan Sokal, Professor of Physics, New York University

"This is an important book at the right time by a clear thinker, elegant writer, and passionate human being. Greta Christina is one of a small handful of atheist authors I can count on to bring that happy combination home, time after time."
-Dale McGowan, author of "Atheism For Dummies"

"Greta Christina knows that the philosophy of atheism is incomplete without practical and sensible advice about how to live in a world full of believers. Her fascinating life experience and astute observations of atheists, in or out of the closet, offers readers some of the most potent testimony for why coming out as an atheist will make a godless life better."
-Hector Avalos, professor of Religious Studies at Iowa State University, author of "The End of Biblical Studies"

"Greta Christina has written the ultimate handbook for coming out. I read this book with an eye for detail, since there are so many nuances in the process of coming out. Greta addresses each one of them with thoughtfulness and compassion. I actually think this book has something for every atheist, not just those coming out. Her insight, understanding, and knowledge mark a new path I have not seen in this kind of book before. As the Chairman of the Board of Recovering from Religion, this book is now on our list of 'highly recommended' for all our members and facilitators."
-Darrel Ray, author of "The God Virus: How Religion Infects Our Lives and Culture"

You have subscribed to alerts for Greta Christina.

You have been added to Greta Christina's favorite list.

You can also sign-up to receive email notifications whenever Greta Christina releases a new book.