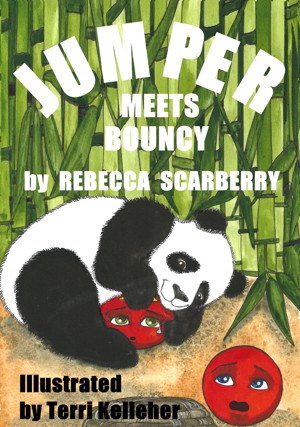 Rebecca Scarberry was born in Southern California. She retired as a claims analyst for an HMO in Las Vegas, Nevada. She lives on a very secluded non-working farm in the Boston Mountains of Arkansas with her husband and five cats. She has devoted her time to writing fiction since 2009 and has self-published works in four different genres.

She published her debut, Messages from Henry in June 2012. It was written for young adults but many adults are finding it very entertaining. The sequel, Where Love Takes You, was published in August 2013. On December 10, 2012, she published a short story called, Rag Doll. This very short story is for adults only. It’s a spicy crime drama, and many readers were taken by surprise by the twist in the end. She’s now being compared to O’Henry. She has since published three children's picture books. It's called her Jumper series, about a funny red beach ball; telling the readers all about his adventures away from the toy store. Children, age 4 and up, want Jumper on TV. She has currently written the script for one episode and will attempt to make this a reality.

Becky Scarberry returns with her third, heartwarming story of a little boy and his red ball named Jumper. In this story, Jumper meets Bouncy, another red ball the little boy had planned to give to his new friend, a little girl who lives in the same town. In the second book, he got the two balls mixed up, and gave his red ball, Jumper to the little girl for her birthday, instead of the new ball, Bouncy. Ms. Scarberry portrays the new red ball as a young girl ball named Bouncy that is eager to go on adventures with Jumper. Jumper is a young, boy ball. In many ways, Jumper and Bouncy reflect the lasting friendship of the young boy and his little, girl friend. The book includes adventures in river rafting and going to the zoo. Familiar zoo animals will delight your children. Some of the animals play with the red balls that fall into the zoo enclosures. The red balls are frightened, at first when the animals play with them, but things turn out fine in the end with the help of the zookeepers. The book introduces the Vortex and its strange effect on visual perception. This is a fine picture book, packed with adventures of two red balls getting lost and then found again in exciting and various settings. The author is hoping to create a television series for these characters. Join me in wishing her success with this venture. Jumper and the cast of characters surrounding him certainly deserve a wider audience of children and parents.

You have subscribed to alerts for Rebecca Scarberry.

You have been added to Rebecca Scarberry's favorite list.

You can also sign-up to receive email notifications whenever Rebecca Scarberry releases a new book.