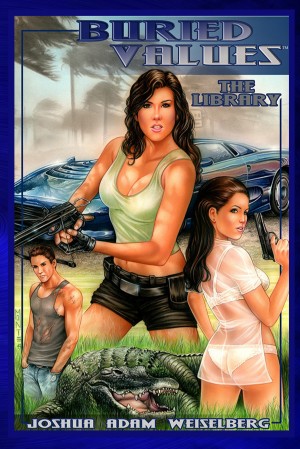 By Joshua Adam Weiselberg
A young lady is chosen to infiltrate the most influential crime family in the South since she appears nearly identical to the Mafia daughter, but unexpected results occur as sex, drugs, money and power lead her away from her role in a crucial treasure hunt. Then she finds a new obsession for revenge her handlers could never have foreseen, and a good girl turns really bad. More
In the year 2016, the drug cartel war has exploded into downtown Baton Rouge, Louisiana!

Buried Values: The Library brings back the hunt for a cursed bounty full of valuables-gone-missing since the Civil War. The story follows a young lady who is assigned a mission she does not understand. Chosen deliberately because she is inexperienced, the girl is continuously manipulated and lied to while the nation’s security is put in danger as rival factions of an organized crime family seek to redefine their relationship with the international drug cartels. Things continue to escalate so as to even put the office of the President of the United States at risk. But while this young professional is assigned to infiltrate one of the most influential and entrenched crime families in the South since she appears nearly identical to the Mafia daughter, unexpected results occur as sex, drugs, money and power combine to cause her to stray from the course. Then tragedy leads her to a newfound obsession for revenge her handlers could not have ever foreseen, and a good girl turns very bad.

All hell is unleashed by the storm that follows when the mission also involves an adventurous archaeology professor with his own suspect reasons for seeking the lost treasure. He is caught in the crossfire with his misguided students, who are first told it’s all only for a college internship opportunity, but start getting eliminated as the bodies begin to fall. After their popular teacher disappears, six Louisiana State students will bind together to complete his quest to recover a fortune in lost treasure on their own, while the two last honest cops in Baton Rouge attempt to save them as a Class Five Hurricane bears down, and something worse is yet to come.

In the end, a young woman’s survival will hinge on a choice: will she fight for justice, or will she fight for only what is best for herself? As she learns the two can never coincide, all will learn what it takes to make a good girl turn really bad.

Told in a blistering action-adventure narrative, Buried Values: The Library digs hard into our true human nature and its regards to sex, love, honor, patriotism, politics, and faith, as well as one's loyalty to family and commitment to public service, versus one’s commitment to self. Dare to embark on this dark journey to discover enlightenment.

Joshua Adam Weiselberg has been a writer his entire life, the son of an English professor and a Navy commander. His interest and respect for history brought him to love to research and learn ever more about the subjects he is intrigued to write about.

Taking it a step further, Josh immerses himself in the action-adventures and has years of experience as a re-enactor in military strategy and combat in the infantry, artillery, on horseback, and on United States Naval ships to specifically include 19th century sailing warships, and an actual F-18 flight simulator. His on-screen performances include frequent outings for westerns, most recently ABC's hit series "Castle," and HBO's "Family Tree," besides documentaries for the Discovery family of learning channels. He frequently signs his books at public events tied into the re-enactments or at historical society meetings where Josh presents his research and demonstrates the alignment between the fiction aspects of his stories, and the facts, by putting them on the actual maps. He loves to interact with his readers in person, as well as online.

Josh grew up an avid fan of baseball beyond all other sports and has played the game since childhood up through his current participation in amateur adult leagues. He has visited many professional ballparks but favorite memories include going to Wrigley Field with his grandpa, and marching around many a stadium with his teammates as a Little Leaguer. He keeps a bat, helmet, and gloves in his vehicle at all times for the spontaneous stop at a batting cage while Josh is on the road. Indeed he likes to plot his stories while hitting baseballs as much as while listening to some good rock 'n roll.

He is also a fan of intense action-adventure-drama and writes in shocking detail that he hopes appeals to audiences of his favorite entertainment that includes such programs as Hell on Wheels and Sons of Anarchy. Josh's writing pace and style has been likened by his readers to Louis D'Amour's fast action westerns and has assembled a team for BURIED VALUES MEDIA GROUP to include a regular editor with a background with New York's premier publishing houses and a cover artist who's worked on such famous projects as Star Wars and Tomb Raider, adding posters and specialty apparel to the Buried Values product line. He hopes you too will enjoy Buried Values.

Reviews of Buried Values: The Library by Joshua Adam Weiselberg

You have subscribed to alerts for Joshua Adam Weiselberg.

You have been added to Joshua Adam Weiselberg's favorite list.

You can also sign-up to receive email notifications whenever Joshua Adam Weiselberg releases a new book.