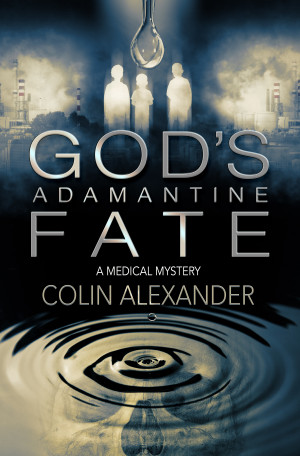 By Colin Alexander
Rated 5.00/5 based on 1 review
Three boys in a town have been diagnosed with a rare cancer, one too rare for coincidence. Is a chemical spill nearby the cause? To find the answers, the physician caring for the last surviving boy teams up with a talk show host who seeks notoriety. This detailed thriller about the intersection of medicine with fear and greed in the real world concludes in a way none of the characters expect. More
God’s Adamantine Fate has at its core a medical mystery. Set in the early 1990’s, three young boys from a small area have been diagnosed with a rare cancer. Two have already died. Could this be coincidence, or is there a more sinister explanation? A local pharmaceutical company has had a chemical spill in a nearby creek. What spilled, though, is an approved drug, a wonder drug. Or, is it? The search for the truth brings together a small-town talk show host, searching for a story to establish her on a broader stage, with the physician treating the last surviving boy, a man who will stop at nothing to do what is right for his patients even though he will not fight for his own interests. To solve the case they must deal with not only the byzantine health care and pharmaceutical industry, but also with a love affair neither believed possible. As this unlikely duo seeks answers, the ripples from their effort spread wider and wider drawing more people into the case. Other individuals and corporations, whether from fear or greed, see in the tragedy an opportunity to exploit for their own ends. Ultimately, this tightly woven and detailed thriller about the intersection of medicine and the real world concludes in a way that none of the characters expect.
Available ebook formats: epub
Price: $1.99 USD
Buy Add to Library Give as a Gift
How gifting works
Create Widget
Tags: mystery mystery and medical fiction for adults fiction medical fiction about corporate america
About Colin Alexander

Colin Alexander is a writer of science fiction and fantasy. Actually, Colin Alexander is a pseudonym, maybe an alter ego, or who the author would have been if he hadn't had a career as a medical researcher. He’s been reading science fiction since he was ten and has published five books so far including Starman’s Saga and Accidental Warrior. He’s an active member of both the Science Fiction and Fantasy Writers of America and of Mystery Writers of America. Away from writing fiction, Colin is a doctor and a biochemist whose idea of relaxation is martial arts (taekwondo and minna jiu jitsu). He lives in Maine with his wife and a cat named Appa. Learn more about Colin at www.afictionado.com and on facebook at @ColinAlexanderAuthor

This is a realistic medical thriller-mystery. The author's personal experience in medicine and research shows on almost every page. The story of what may have caused rare and fatal cancers almost becomes lost at times among a huge cast of characters, all pursuing their personal interests in medicine, broadcasting, research, the pharmaceutical industry, business, and politics. I admit I had a bit of trouble following the different scenarios at times, but by the halfway point, a pattern emerged. Even minor characters are given distinctive quirks and mannerisms that distinguish them and help to keep them straight. And the two principal characters, pediatric oncologist Zeke Schwartz and radio talk show host Acey Henson, are definitely memorable.
Through the interactions of all these characters, the reader gets a look at how various systems work and affect one another. People who treat sick children, other people who make drugs to treat disease, who sell those drugs, who invest in the companies that develop and produce drugs. Then there are the behind-the-scenes people who test the drugs and keep track of the results, and the FDA which regulates and monitors those drugs. Throw in the media and a few politicians and things get complicated.
The plot is well thought out and worth following through the different perspectives. The human element isn't forgotten, however. We see people doing their jobs, experiencing highs and lows in the process. There aren't any really evil characters, but a few are less than admirable. Acey is a bit rough but her good qualities outweigh the not so good. Zeke is almost too good to be true at times, but that makes it easy to root for him. Some characters' stories are left unresolved at the end, just like in "real life." Altogether, this is an interesting and satisfying read.

You have subscribed to alerts for Colin Alexander.

You have been added to Colin Alexander's favorite list.

You can also sign-up to receive email notifications whenever Colin Alexander releases a new book.