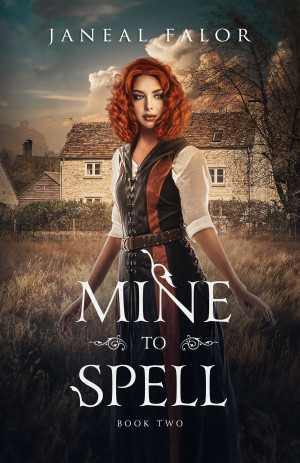 For once, Cynthia isn’t going to let her older sister shield her from the problem. She’s going to prove to herself, her sisters, and society that her family isn’t a threat to their traditions. She willingly chooses to be purchased by a new master. A bold step that takes her somewhere she never thought she would go and to a man she might possibly fall in love with. With his help, she may just find a way to save her sisters while discovering how to stand up for herself. If she lives long enough.
Available ebook formats: epub mobi pdf rtf lrf pdb txt html
First 30% Sample: mobi (Kindle) lrf pdb Online Reader
Price: $4.99 USD
Buy Add to Library Give as a Gift
How gifting works
Create Widget
Tags: relationships magic family sisters warlock magic and fantasy
About Janeal Falor

Janeal Falor lives in Utah where she’s finally managed to live in the same house for more than five years without moving. In her spare time she reads books like they’re nuts covered in caramel and chocolate, cooks whatever strikes her fancy, and enjoys the outdoors. Her husband and three children try to keep up with her overactive imagination. Usually they settle for having dinner on the table, even if she’s still going on about the voices in her head.

Also in Series: Mine

Reviews of Mine to Spell (Mine #2) by Janeal Falor

Review
LivedOneThousandLives reviewed on May 30, 2014

Mine to Spell by Janeal Falor:
*I received this in ebook format in exchange for an honest review*

Overall: This is the second book in the Mine Series, check out my review of the first one, You Are Mine, here! In case you don't check that out, I gave it 5/5 stars. This book is told from the second eldest sister's perspective, Cynthia. The girls live in a world where women are expected to be submissive to the dominating male warlocks, but Cynthia, following her sister's lead, rebels. This book is just as good as the first, if not better. I thought the idea to change the perspective to another sister was a genius idea to keep telling the same storyline without telling the exact same story. The plot draws you in by page two and it never lets go. This story deals with deep issues like sexism and prejudice while keeping the reader intrigued with action and adrenaline. The speech, while old English(y) doesn't seem choppy or difficult like that sort of dialect sometimes is. The relationships between characters are the high point for me, especially between Cynthia and a man named Lukas. I love the fact that these books don't center love overcoming everything. In many YA books, once the girl falls in love, all her issues fall away, but in this, sexism still exists *gasp*. The author focuses more on the strength of the women and the struggle against discrimination, while allowing the romance aspect to add to the plot as a smaller detail. The setting is described clearly and leaves enough to the reader's imagination. One of my favorite aspects of these books, more the first than this one, is the fashion aspect. A tarnished, what they call slaves, named Katherine is a wonderful seamstress for the girls and makes them *gasp* breeches, forbidden for women to wear. Just the idea of rebelling by wearing certain clothes or changing a hairstyle is so fitting for this rebellion. I found the scenes with all of the girls in the ballroom to remind me greatly of Entwined by Heather Dixon, which I gave 5/5 stars, my review here! The tournament had just enough twists and turns to leave me shocked, especially in the last duel. The whole book is lovely, absolutely lovely.

Characters: All of the characters had distinctive, unique personalities, which shined in this book. Cynthia is a spitfire to a t. Serena is just as caring as ever. Zade just about broke my hear when he finally broke down about his feelings. Lukas is just the sweetest man I've ever read. Katherine is so strong and rebellious for being a tarnished. Everyone was simply amazing.

Quotes: Since I read it on my Kindle, I don't have pictures, but these are my favorite quotes.

"They've taken what's mine. And I want it back."

"Freedom. A word more magical than any spell I can cast."

Rating: 5/5 stars. I adore this book with my whole heart!

You have subscribed to alerts for Janeal Falor.

You have been added to Janeal Falor's favorite list.

You can also sign-up to receive email notifications whenever Janeal Falor releases a new book.