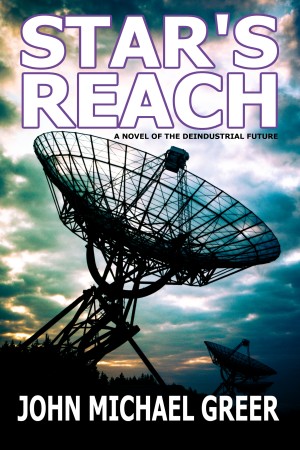 John Michael Greer is the author of more than thirty books, including four books on peak oil and one science fiction novel, The Fires of Shalsha, as well as the weekly peak oil blog The Archdruid Report. A native of the Pacific Northwest, he now lives in an old red brick mill town in the north central Appalachians with his wife Sara.

I hate to call this book post-apocalypse because that sub-genre is so full of cliches. Star's Reach contains no cliches. It's a future in which the United States has collapsed in a way that isn't actually described, but includes the ecological disasters that we are now being faced with.

The US has gone through three civil wars and is now split into several nations. The citizens of "Meriga" are living at a simpler level, but are not desperately crawling in the dirt or fighting each other for the basics of life. The story is engaging even while it shows us the consequences of uncontrolled technology and the drive for constant growth. Unlike most of the genre, it's a hopeful book, and points the way to a realistic and viable future.

You have subscribed to alerts for John Michael Greer.

You have been added to John Michael Greer's favorite list.

You can also sign-up to receive email notifications whenever John Michael Greer releases a new book.