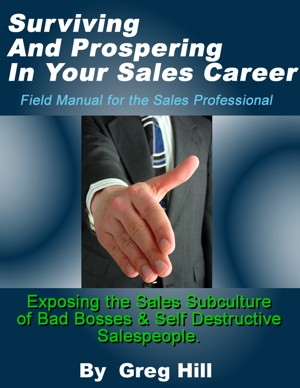 Surviving & Prospering in Your Sales Career - Field Manual for the Sales Professional.

By Greg Hill
Not your typical sales book,which is filled sales tips and motivational stories. This is an honest and logical guide on how to survive in the sales environment. The author explores the reasons behind hiring practices the reasons behind hiring practices, pay plans, and reveal what your job is in their eyes. An unabashed version of the love/hate relationship that companies have with sales people.
Available ebook formats: epub mobi pdf rtf lrf pdb txt html
First 15% Sample: epub mobi (Kindle) lrf more Online Reader
pdb
You set the price! USD
Buy Add to Library Give as a Gift
How gifting works
Create Widget
Tags: sales office politics sales management pay plans history of sales sales training sales professionals sales managers sales book sales coaching
About Greg Hill

Greg Hill took his first sales job in 1978. He has been involved in sales or sales management ever since. He has held positions as an employee, a consultant, a sales manager, an independent contractor, a small business owner, and the owner and president of his own consulting firm. He has worked both on a national level and a local level selling to consumers, local business owners, and national and multinational corporations. Besides being a salesperson himself, he has hired, trained, motivated, and fired salespeople for thirty years. Greg has been on every level of the management team from low level management to Vice President of Sales. He knows salespeople and the world of sales. Greg’s resume includes being an account executive for Wieder Enterprises (Muscle & Fitness, Shape and Flex magazines) 1982 - 1983, and The Western Sales Manager for FIT Magazine (Fit, Runner’s World and Strength Training for Beauty magazines) 1983 – 1984.

In November of 1984, he founded The Gregory Hill Company. His clients and positions in their organizations included being a Direct Response Consultant, Vice President of Win Management, a consultant for Buy By Video (a Sub-division of TBC Corporation), and President of Palmer Associates, a magazine rep firm created with Woman’s Sports & Fitness to sell advertising on the West Coast. From 1988 to 1994 he worked in the Yellow Page industry where he was the top representative for GTE Corporation. From 1994 to 2000, Greg became the owner of a small business Politically Incorrect Tobacco & Gifts. After closing his shop, Greg then went to work as the National Sales Manager for 411Web until 2003. In 2003 he again went into business for himself by founding the corporation and consulting firm Greg Media.

Today Greg is both a consultant and Vice President of Sales for his major client Planet Online. His responsibilities include market penetration for all of Planet Online’s products (web hosting, website creation and development, an Internet service provider, a cost comparative search engine, and both VOIP and Competitive Local Exchange Carrier phone service), hiring and training of salespeople, acquisition and maintenance of key accounts, advertising, and marketing strategies. As part of the senior staff at Planet Online, he has been involved in or asked to consult on all the major decisions made by the company since 2006 and have been part of the day-to-day decisions that are necessary to keep the company running. Greg is also doing sales and marketing consulting for numerous other corporations. His team analyzes the current sales effort, helps train the existing sales force, and suggests new marketing strategies. He has assisted many organizations in reaching their true potential and sales goals.

Reviews of Surviving & Prospering in Your Sales Career - Field Manual for the Sales Professional. by Greg Hill

You have subscribed to alerts for Greg Hill.

You have been added to Greg Hill's favorite list.

You can also sign-up to receive email notifications whenever Greg Hill releases a new book.