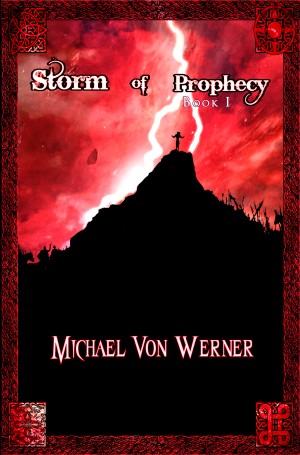 Strange deaths and disappearances plague the people of the nearby city and the authorities have been unable to learn anything about who or what may be behind it. When tragedy befalls someone close to him, he finds himself at the center of a terrible secret that will shake the very foundations of his world...

The Storm of Prophecy

Author of the Storm of Prophecy Series, Von Werner is a Montana native who has spent untold weeks traversing the Rocky Mountains. A graduate of the University of Montana with degrees in Geography and Central and Southwest Asian Studies, his love for snow-capped peaks, glacier-cut valleys lush with evergreens and rolling plains can be seen in his writings. Over the years he's done work for the US Fish and Wildlife Service, his local Volunteer Fire Department and the Montana Food Bank Network.

Von Werner has carefully planned out his entire series and won't stop until it is finished. He can often be found writing his next novel with a mug in one hand and a dog at his side.

Reviews of Storm of Prophecy, Book I: Dark Awakening by Michael von Werner

NICE! Waiting for your second book.

This book is pretty dull and the main character is a wuss. Not really anything here to bother reading through. The book has basically one action scene in the first half and the next several chapters are people discussing the ramifications of that scene. I finally stopped reading after the action slowed to a crawl.

A good attempt. The characters need to be fine tuned and the story needs to flow more smoothly. I felt myself becoming irritated with the utter stupidity of most characters - perhaps the author attempted to portray them as complacent, but they unfortunately did not come across as such.

You have subscribed to Smashwords Alerts new release notifications for Michael von Werner.

You have been added to Michael von Werner's favorite list.

You can also sign-up to receive email notifications whenever Michael von Werner releases a new book.