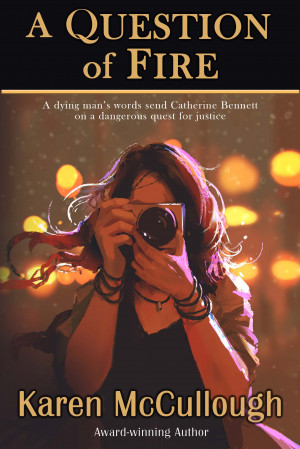 A Question of Fire

The man who killed Bobby saw him talking to her and assumes she knows where the evidence is hidden. He wants it back and he'll do whatever it takes to get it, including following her and trying to kidnap her.

Reviews of A Question of Fire by Karen McCullough

A Question of Fire is a page-turning mystery that also offers a romance between the journalist heroine (Cathy) and the lawyer hero (Peter). Cathy witnesses a murder and is the only one to hear the man's dying words. The victim was trying to clear his brother of arson and murder charges, and everyone -- from the brother and his lawyer Peter to the killer and a mysterious, sexy private investigator -- wants the evidence. Cathy investigates the death, which puts her squarely in the path of men who'll stop at nothing to get what they want. I thoroughly enjoyed following Cathy on her thrilling fight to save a wrongly accused man from prison.

Arson. Murder. Mystery. Adventure. Romance. Ms. McCullough blends them all seamlessly together in A QUESTION OF FIRE a fast-paced, engaging tale.

When a young man is murdered and dies in her arms news reporter Catherine Bennett is thrust into a dangerous situation. The mystery of the man's final words and the fate of his younger brother Danny compel her to investigate even after she's kidnapped and her life is threatened. She's joined by Peter Lowell, Danny's lawyer. Though Catherine's and Peter's relationship starts off rocky the romance that develops between them is believable and fits in well with the mystery plot. I also enjoyed the dynamics and growing relationships between Catherine and Danny and Peter and Danny.

As Catherine and Peter try and determine where the murdered man hid evidence that would clear Danny of an arson/murder charge, the murderer is determined to do whatever is necessary to stop them. I liked that the characters acted and reacted to each situation like real people. They weren't perfect or able to kick-ass without breaking a sweat. It took them time and effort and lots of investigating to discover the truth and find the missing evidence. And when the hiding place was revealed I smacked my head in surprise. Talk about hiding in plain sight.

Ms McCullough has a talent for telling an exciting story that will keep you up past your bedtime to find out what happens next.