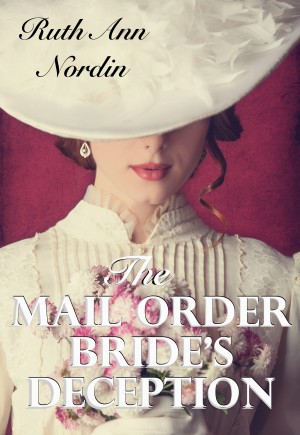 Rated 5.00/5 based on 2 reviews
Sadie Miller’s heart raced with trepidation as she looked at the letter in her hands from the man who waited for his mail-order bride. When she stepped out of this stagecoach, she would be Hazel McPherson. Not Sadie. And her secret would go with her to the grave, no matter what. More
“A hardworking gentleman of 26 years old, 6 feet, owner of a small cabin who lives off the land desires marriage. Lady must be between 18-25 years, have a loving disposition, and be willing to mother a baby boy. Though comforts will be few, would like a happy marriage.” Mail Order Bride Ad Written by Allen Grover on March 20, 1878

It wasn’t until September that Al’s bride came to the Black Hills of the South Dakota Territory. He expected Hazel McPherson. But he got Sadie Miller.

Before Hazel died in Omaha, she told Sadie to take her place as Al’s mail-order bride. Under ordinary circumstances, Sadie would never pretend to be another woman. But in this case, it was her only chance of escaping the prison that had become her life.

And there was no way she could tell anyone the truth. No. Her secret would stay with her to the grave, especially from the one man she was beginning to love.

The Mail Order Bride's Deception by Ruth Ann Nordin
Sadie Miller couldn't believe when she got a free pass out of the life she was stuck in. She just had to become Hazel McPherson and meet her new husband and child in Rapid City. Of course, she had to let him believe she was Hazel, if she told him the truth he would have never married her. And she knew that there was no way he'd ever find out on his own. Never.

Allen Grover couldn't believe his luck. That not only did Hazel willingly leave a life of wealth and leisure to marry him, but that she is also such a beauty. She might need to learn to do the things that she always had servants to do for her, but he wouldn't be lonely and Gilbert would have a mother. That was all he cared about. Though he did wonder what had happened in Atlanta that Hazel refuses to talk about.

Secrets. Sadie had them and kept them. The thing about secrets and hiding the truth...it always seems that somehow, someway they find an opening to sneak out. I loved this story. There are some pretty tough situations in it and even though it's historical...some things are very true even today.
**Sexual content within marriage
http://justjudysjumbles.blogspot.com/2011/09/ruth-ann-nordin.html