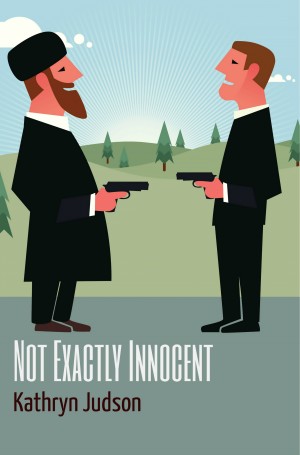 By Kathryn Judson
When a mad would-be conqueror starts hiring and kidnapping experts in bioweapons and missiles, Triple-O Five and his bride are called back into action sooner than planned. (This is the 2014 revised edition.) More
The MI5 1/2 adventures continue, in this more tightly edited, 2014 edition of Not Exactly Innocent.

Triple-O Five and his bride are pulled back into action sooner than planned, when a mad Viking wannabe is found to be hiring and kidnapping experts in bioweapons and missiles. It doesn't make it any easier that one of the scientists is Durand's beloved and naive uncle, who might not quite understand the evil intent of his new patrons.

It also doesn't help that much of the investigation must take place in the United States, whether the feds like it or not. Which they don't.

Are we having fun yet?

Almost Hopeless Horse was inspired in part by her horse Yob, who was afraid of cattle. Trouble Pug combines a love of history, time travel stories, and her late husband's fondness for a pug that traveled the country with him in his younger days. Why We Raise Belgian Horses got its start in stories from her husband's Norwegian-American family, including a story his grandfather told of a horse with an unusual phobia. The MI5 1/2 series started off as a spoof of spy novels but ended up being more serious than that in places (although still fairly silly overall). When she got tired of dystopian novels that ignore God and don't seem to understand that conversion is an option for people, she launched into the Smolder series, which also pokes sharp sticks into the evils of racism and social engineering, while still having fun with romance and friendship.

Mrs. Judson is an adult convert to Christianity. You will find, if you read her books, that the ones from early in her walk are generally more in line with an Americanized national religion than with the Sermon on the Mount (found in the Bible in Matthew chapters 5 through 7) and other foundational commands of Christ Jesus. It took her a while to realize that some of what she was taught in church and had acquired from pop culture and from reading "Christian" books was often at odds with Jesus and His apostles. Therefore, with many of her books, you'll find American "conservative" values and ways of thinking more than Christian ones. In all cases, you should always compare what is presented against what Christ teaches. When there's a difference, go with Jesus.

She has lived most of her life on the rain shadow side of Oregon, but has also lived and worked in Texas, South Dakota, and Wisconsin. She also long ago traveled through Central America, and Canada, and to Japan. Also way back when, she toured with Up With People, and as a lowly flunky helped put on a Superbowl halftime show. In her school days, she was active in community theater, both on and off stage. One summer during her newspaper days, she took time off and worked for a summer stock theater company in the Black Hills of South Dakota. In 2017, she asked her church in Idaho to plug her into something and got sent across the country to Kentucky to take care of babies and toddlers of women who were in prison, jail, or drug rehab. She did that for three years. Since then, she has been a live-in caregiver in private settings.

Always a history buff (even in grade school!), Mrs. Judson switched in recent years to studying the history of the church, from the teachings and trials of the apostolic church right on up to the present day, with an emphasis on the persecuted church. She finds the Radical Reformation (the rise of the Anabaptists), and other 'radical reformations', like the American Restoration Movement and the rise of the early Methodists, etc., especially interesting.

Reviews of Not Exactly Innocent by Kathryn Judson

You have subscribed to Smashwords Alerts new release notifications for Kathryn Judson.