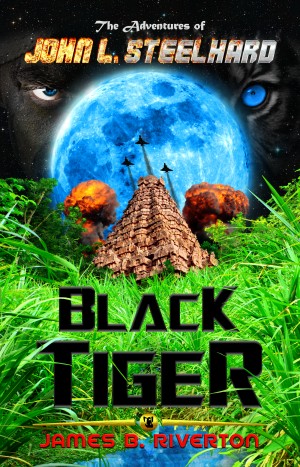 Black Tiger - The Adventures of John L. Steelhard, Book One

The author was born in San Francisco, Calif. Raised in Texas, Europe and the Middle East while living on an oil tanker part- time, at the age of eight, traveling from England, and France, transporting crude oil from the Middle East to those countries, with his parents. Endless days and nights tramping along at five knots, back and forth. The author learned to swim in the Suez Canal while waiting to transit the canal, traveled through the ruins of Europe and Middle East observing the destruction from the Second World War first hand. He learned to communicate in different countries, sometimes with gestures and good cheer by sharing Hershey Bars with the local children to make friends.

At the age of 17 the author joined the Navy to see the rest of the world and especially the Far East. Serving during the 1960's he served three tours of duty during the conflict in Indochina, seeing much of the Far East, and learning about the culture and the people. One of the highlights of his service was meeting President John F. Kennedy, a month before his death, prior deploying to the Far East while aboard the aircraft carrier USS Oriskany, CVA-34.

Upon discharge, the author traveled, working overseas construction for Brown and Root, dealing cards in Las Vegas, bartending, waiting on tables in various exclusive resorts, working as a Assistant General Manager in Vail, Colorado. In his travels during this period the author met and served movie actors, Senators, President Gerald Ford, and a host of characters of all walks of life.

A graduate of Stephen F. Austin, with a BFA, the author wrote a few screen play outlines, and unpublished stage plays, but never found the time, or the desire to try writing novels. However, he did find the courage to pursue the love of his life, and after five years was successful, at the age of 37, to finally marry, starting a family.

Over the next years he entered the world of Real Estate, selling homes, starting home building companies and developing land for residential use. This career of boom and bust carried his family from Texas to Washington, DC and back. Up and down, through thick and thin surviving roiling markets. During slim times finding alternate ways to support a growing family by starting up a successful pre-paid phone card and ad promotional business. Learning one of the most important lessons in life, raising children and learning how to be a father.

Always, in the back of his mind remained the ultimate personal challenge, of writing a book, not for recognition, but to see if he could. During the 2008 financial collapse it seemed writing a book would maintain ones sanity. One book turned into a completed series, then more books, to the point that the next challenge was to publish this growing disease gumming up his personal computer.

Someone explained writing a book was only 20 to 50% of the effort, the rest was sitting here inputting a personal bio and figuring out that it takes a whale of an effort to publish a book. All he can say is that after all he has seen, and experienced in life, that this is the most taxing thing he has ever attempted, and his hat is off to anyone that has ever contended with this process, let alone become successful.

My only goal in life in the end has been to write, and it has become a joy to me. If one person reads anything that I write, and enjoys it, for whatever reason, then I have found success with this part of my life. If anyone can bring laughter or ethos into another's life, if only briefly, then what more can you ask for, except for a winning lottery ticket. My winning ticket has been family and friends, seeing the sun rise each day, thanking the main man for a great life and the passion to finally tell some stories.

Learn more about James B. Riverton

You have subscribed to alerts for James B. Riverton.

You have been added to James B. Riverton's favorite list.

You can also sign-up to receive email notifications whenever James B. Riverton releases a new book.