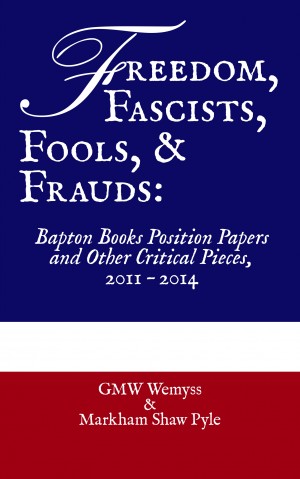 By GMW Wemyss
Free speech, free minds ... the assault is unremitting on these liberties. The partners in Bapton Books have a few words on that, and a Classical Liberal perspective on fighting back. More
Here are collected some of Bapton Books’ position papers from the past three years, and other critical writings by Mr Pyle and Mr Wemyss. Provocative – not to say, provoking – and all too often prescient, these papers detail the dirty work at the crossroads where the culture, law, politics, and policy intersect.

We live in a time in which ‘advocacy’ and indeed democratic politics are far too regularly degenerating into objective fascism; in which liberty is under assault at home; and in which quite evident fascists and tyrants abroad are on the march. There is a remedy: the full-throated defence of freedom, by all of us, together, on all sides of all issues. You may find the prescription – the mixture as before – in these pages.

Bapton Books Position Papers aim to inform, to question, to educate, to assert, to challenge, to analyse, and, always, to spark debate. They are made available to the reading public and to all who are intelligently interested in the affairs of the day.

Parliamentary historian, chronicler of Titanic’s sinking and Churchill’s ascent, annotator of Kipling and of Kenneth Grahame: GMW Wemyss lives and writes, wisely pseudonymously, in Wilts. Having, by invoking the protective colouration of tweeds, cricket (he was a dry bob at school), and country matters, somehow evaded immersion in Mercury whilst up at University, he survived to become the West Country’s beloved essayist; author or co-author of histories of the Narvik Debate, the fall of Chamberlain and the rise of Churchill, of 1937 – that year of portent – and of the UK and US enquiries into the sinking of Titanic; and co-editor and co-annotator of Kipling’s Mowgli stories and Kenneth Grahame.

You have subscribed to alerts for GMW Wemyss.

You have been added to GMW Wemyss's favorite list.

You can also sign-up to receive email notifications whenever GMW Wemyss releases a new book.