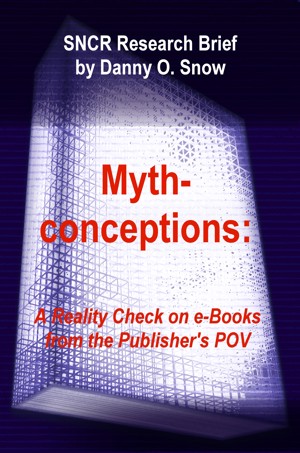 Mythconceptions: A reality check on e-Books from the publisher’s POV

SELF-PUBLISHERS MONTHLY was launched in 2013 by Harvard graduate Danny O. Snow. He has served as a senior research fellow of The Society for New Communications Research (SNCR.org) since 2008. Snow also works as a consultant to fellow authors and publishers, as a public speaker, and as a journalist. He has written for Publishers Weekly, The Independent, Huffington Post, Indie Reader and many other print and online publications. He is widely quoted by other major print, broadcast and online media about new publishing and communication technologies. In 2009, he was elected to a two-year term on the board of directors of the Independent Book Publishers Association, serving 3,000+ publishing firms across North America and around the world. (Staff photo by Thomas Buckner, Copyright © 2009, all rights reserved.)

Reviews of Mythconceptions: A reality check on e-Books from the publisher’s POV by Danny O. Snow

You have subscribed to alerts for Danny O. Snow.

You have been added to Danny O. Snow's favorite list.

You can also sign-up to receive email notifications whenever Danny O. Snow releases a new book.