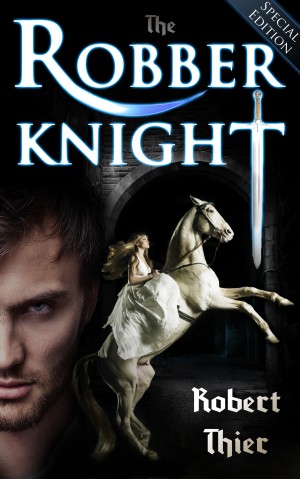 By Robert Thier
Rated 5.00/5 based on 1 review
When you are fighting for the freedom of your people, falling in love with your enemy is not a great idea. Or is it? Ayla has to defend her castle and her people all on her own, with nobody to help her but a dark warrior she hates with all her heart.

Special Edition with extra chapters revealed. More
Sir Reuben, the dreaded robber knight, has long been Ayla’s deadliest enemy. He has prayed on her and her people ever since her father fell ill, and she swore he would hang for his crimes. Now they are both trapped in her castle as the army of a far greater enemy approaches, and they have only one chance: stand together, or fall.
Welcome to “The Robber Knight”—a tale full of action, adventure, and romance.

Robert Thier is a German Historian and writer of Historical Fiction. His particular mix of history, romance and adventure, always with a good deal of humor thrown in, has gained him a diverse readership ranging from teenagers to retired grandmothers. For the way he manages to make history come alive, as if he himself had lived as a medieval knight, his fans all over the world have given him the nickname “Sir Rob”.

For him, Robert says, becoming a writer has followed naturally from his interest in history. “In Germany,” he says, “we use the same word for story and history. And I've always loved the one as much as the other. Becoming a storyteller, a writer, is what I've always wanted.”

Besides writing and researching in dusty old archives, on the lookout for a mystery to put into his next story, Robert enjoys classical music and long walks in the country. The helmet you see on the picture he does not wear because he is a cycling enthusiast, but to protect his literary skull in which a bone has been missing from birth. Robert lives in the south of Germany in a small village between the three Emperor's Mountains.

Reviews of The Robber Knight - Special Edition by Robert Thier

Review
Railwayworker reviewed on May 17, 2014

This book has it all - romance, excitement and a good portion of sarcastic humour - and fun historical facts in the foot notes. Rob Thier has a way with his characters that makes them all interesting, with good sides and bad. Although the major villain in the book is probably all bad, apart from having a good taste for fine armour.

The only drawback is the abrupt ending where a lot of questions remain. Luckily the next book is on it's way.

You have subscribed to alerts for Robert Thier.

You have been added to Robert Thier's favorite list.

You can also sign-up to receive email notifications whenever Robert Thier releases a new book.