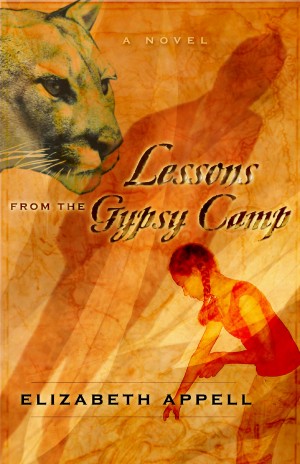 Lessons From the Gypsy Camp

Lolly Candolin can deal with having no friends and a drug-addicted mother, but her alcoholic, lawyer father is intolerable. At her ultimatum to quit the bottle, he hurls her cat-and best friend-off a levee into a gypsy camp. Secretly searching for Bo, Lolly finds not only new friends, but murder and a terrible choice. Should she save an innocent man's life, or finally win her father's love? More
Consequences...

The year is 1955. Eisenhower is president, the McCarthy hearings are over, and Lolly Candolin has given her alcoholic and abusive father an ultimatum to quit the bottle or she will shave her head. Refusing to have his life dictated by a ten-year-old child, her father wraps her aged cat-and best friend-in a burlap sack, and flings him from the high town levee down into a mysterious gypsy camp.

Rejecting everything she's been told by her father, Lolly secretly searches the gypsy camp for Bo. There she encounters a lively cast of misfits, including: Tick, a tomboy her own age; Sophia, Tick's mother and gifted healer; and Sam, the unofficial leader of Cougarville.

Soon, Lolly and her new friends are caught up in a maelstrom of murder and intrigue when the county sheriff is brutally murdered at a local saloon. All evidence points to Sam. Lolly's father, the county prosecutor with everything to lose, goes after the case full bore, determined to see Sam tried, convicted, and executed. During a clandestine mission to warn the Cougarville residents of her father’s ruthless intentions, Lolly discovers the identity of the true killer, putting into motion a terrible dilemma that no young girl should ever have to face. Revealing her evidence will not only set an innocent man free, but destroy her father’s career; and any chance of winning what she yearns for most: her father’s approval.

Elizabeth grew up in the Sacramento Valley. It seemed natural to place her debut novel Lessons from the Gypsy Camp in the small town in which she lived until she was sixteen. At that point she moved to Berkeley where she attended a girls school. The setting spawned another novel, Elements of Betrayal, which she just completed.

She and her husband, Allen, have traveled extensively. When they visited Spain, she became enthralled with the spectacle of the bullfight. Wanting to experience the thrill of the ring, she took a four-day intensive with Matador Dennis Borba. On the fourth day she attended a tiente, a bloodless event designed to test the courage of calves earmarked for breeding. Elizabeth entered the ring twice and fought two brave calves.

She has written and directed two short films, Easy Made Hard (easymadehardthemovie.com) and Warnings from the Bathtub (warningsfromthebathtub.com). Both were invited to screen at over 20 festivals and both won at Huston WorldFest.

Elizabeth has written several award winning plays. Moon Walkers was given a directed stage reading by the Virtual Theatre Project in Los Angeles. James Denton (Desperate Housewives) played the lead and Heidi Mages played opposite him. The film script adapted from the play has placed in several competitions.

Virtual Theatre Company did a full production of her play Confessions of a Catholic Child, staring Sandra Ellis Lafferty (Walk the Line, The Hunger Games) and Heidi Mages, (The Inevitable Undoing of Jay Brooks).

Second only to her children and grandchildren, she loves to write stories.

You have subscribed to alerts for Elizabeth Appell.

You have been added to Elizabeth Appell's favorite list.

You can also sign-up to receive email notifications whenever Elizabeth Appell releases a new book.