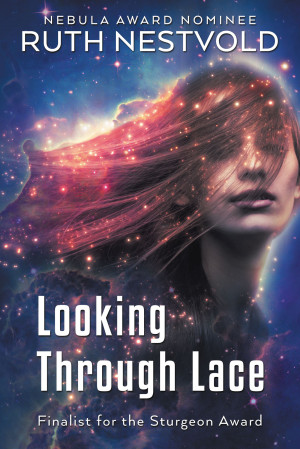 By Ruth Nestvold
Rated 4.00/5 based on 1 reviews
As the only woman on the first contact team, xenolinguist Toni Donato expected her assignment on Christmas would be to analyze the secret women's language which cannot be spoken by men -- but then the chief linguist begins to sabotage her work. But why? Why do the men and women have separate languages in the first place? What Toni learns turns everything they thought they knew on its head. More
Originally published in Asimov's in 2003, "Looking Through Lace" was a finalist for the Tiptree and Sturgeon awards. The Italian translation won the Premio Italia for best work of speculative fiction in translation in 2007.

"'Looking Through Lace' by Ruth Nestvold is terrific science fiction. I want to read more of this writer's stories."
Andi Shechter in January Magazine

"... 'Looking Through Lace' by Ruth Nestvold [is] an intelligent, complex story illustrating the difficulties of learning and understanding the nuances and intricacies of an alien language and culture, particularly one so similar to our own that we persist in viewing it (wrongly) on our terms.... The reason ... why there are so many differences between the languages of both men and women are logical and well thought out, and the final revelation about the true nature of the relationship between the women and the men comes as a nice twist."
Phil Friel in Tangent Online

A former assistant professor of English in the picturesque town of Freiburg on the edge of the Black Forest, Ruth Nestvold has given up theory for imagination. The university career has been replaced by a small software localization business, and the Black Forest by the parrots of Bad Cannstatt, where she lives with her fantasy, her family, her books and no cats in a house with a turret. Her short fiction has appeared in numerous markets, including Asimov's, F&SF, Baen's Universe, Strange Horizons, Scifiction, and Gardner Dozois's Year's Best Science Fiction. Her fiction has been nominated for the Nebula, Tiptree, and Sturgeon Awards. In 2007, the Italian translation of her novella "Looking Through Lace" won the "Premio Italia" award for best international work. Her novel Flamme und Harfe appeared in translation with the German imprint of Random House, Penhaligon, in 2009 and has since been translated into Dutch and Italian.

About the Series: Looking Through Lace

As the only woman on the first contact team, xenolinguist Toni Donato expected her assignment on Christmas / Kailazh would be to analyze the secret women's language -- but then the chief linguist begins to sabotage her work. What is behind it? Why do the men and women have separate languages in the first place? What Toni learns turns everything she thought they knew on its head.

Also in Series: Looking Through Lace

Enjoyed reading this story. The plot is very well constructed.

You have subscribed to alerts for Ruth Nestvold.

You have been added to Ruth Nestvold's favorite list.

You can also sign-up to receive email notifications whenever Ruth Nestvold releases a new book.