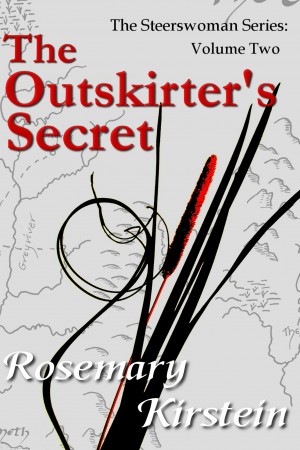 By Rosemary Kirstein
Rated 5.00/5 based on 4 reviews
The Guidestars: two shining lights hanging motionless in the night sky. But the steerswoman Rowan has learned that there are more than two -- and that one, astoundingly, has fallen, and now lies deep in the distant Outskirts. Traveling with her friend Bel, an Outskirter warrior-poet, Rowan has a chance of surviving the wild and deadly land. But there are more secrets than one in the Outskirts. More
The Guidestars: two shining lights that hang above, motionless in the night sky. The common folk know them well, and use them to count the hours and mark the seasons. But when the steerswoman Rowan discovers a number of broken blue jewels of clearly magical origin, her investigations lead to startling discoveries: there are other, unknown Guidestars -- and something has caused one of those to fall. She knows one more thing: where the fallen Guidestar was located. To reach it, she must cross the Inner Lands and pass deep into the wild and deadly Outskirts. Rowan's traveling companion, Bel, is an Outskirter herself, and together the steerswoman and the warrior-poet have a chance of surviving the cruel landscape, the barbarian tribes, and the bizarre native wildlife. But there are more secrets than one in the Outskirts. And each step closer to the Guidestar brings new truths, leading Rowan toward the deepest secret of all...
Available ebook formats: epub mobi pdf rtf lrf pdb txt html
First 20% Sample: epub mobi (Kindle) lrf more Online Reader
pdb
Price: $2.99 USD
Buy Add to Library Give as a Gift
How gifting works
Create Widget
Tags: bel rowan inner lands outskirter steerswoman steerswomen blackgrass guidestar outskirts redgrass slado

Also in Series: The Steerswoman

Reviews of The Outskirter's Secret by Rosemary Kirstein

Simply brilliant. I did not think the first book in the series could be improved upon, but this sequel presents just the right balance of novelty and familiarity. I am now struggling to keep myself from devouring books 3 and 4, knowing they are a limited resource.

I remain unable to believe this series is not cited among the very, very best fantasy. Rosemary Kirstein ought to be lauded, celebrated, venerated.

(reviewed 37 days after purchase)
Robbie Clark reviewed on May 2, 2022

This was an excellent sequel

(reviewed 22 days after purchase)
Kpermanganate reviewed on May 14, 2021

After receiving multiple reminders to leave reviews, I decided that I should start with the best SFF books that I have bought from Smashwords. Unfortunately, I have to start the reviews of this series with volume 2 because after reading reviews such as https://www.tor.com/2008/10/30/not-only-science-fiction-but-more-science-fictional-than-anything-else-rosemary-kirsteins-steerswoman-books/, https://jamesdavisnicoll.com/review/the-steerswoman and https://www.bastianbalthasarbooks.co.uk/2019/06/review-steerswoman-series-by-rosemary.html with statements such as Jo Walton's "They’re certainly in my top five books of all time, and they just keep on getting better the more I re-read them" and knowing that the "The Steerswoman" had been on the list for a Locus Award when published, I am embarrassed to admit that I did not expect to find them at Smashwords and only realised that the ebooks were Smashwords editions when starting to read the first volume.

The first two volumes of the series follow the adventures of two very competent and very intelligent women, Rowan and Bel, from contrasting backgrounds who agree to work together to investigate what they feel is a common threat from wizards. We are plunged into what seems to be a fantasy secondary world where wizards perform magical spells but which we slowly come to identify as a planet being terraformed by processes involving satellites but also using the human population in a gradual process.

Speculating ahead of the four published volumes, I imagine that the wizards are descendants of the crew of a colony ship bringing humans from Earth, who have maintained a monopoly of advanced technology (this and that things are coming apart are the only similarities to Zelazny's Lord of Light). Speculating even further, I suspect that the crew did not pass their knowledge on because their protocols, had they obeyed them, would have prevented them staying at this planet and would have forced them to make a new voyage.

The human inhabited region of the planet is divided into the green Inner Lands, which are reminiscent of late medieval or early modern Europe with a mostly agricultural economy, small towns, metal goods including jewellery and a fair degree of literacy, and the Outskirts where life depends on red grass and unusual goats and metal and even wood is in short supply and paper unknown. Beyond the Outskirts, there is the black grass covered prairie where almost everything is toxic to humanity.

Rowan is a product of the Inner Lands and her ideas of morality are not wildly divergent from those of most readers. Bel by contrast is an Outskirter and, whilst controlled and cautious during her visit to the Inner Lands, is ready to use violence with great ruthlessness. Although Rowan has been trained to use a sword, she is much less skilful than Bel especially at the start of the story. In the first violent episode, Rowan manages to duck at Bel's shout and roll away from soldier who is trying to kill her but struggles to get her sword free of its scabbard before Bel has killed him.

However, Rowan is a Steerswoman, one of an order dedicated to finding the truth and using logic and what we call the scientific method. Bel quickly realises that, if you want to find out what is going on, asking Rowan to investigate is your best option.

The first volume is set in the Inner Lands with Bel almost the central character as she demonstrates her loyalty, skill and determination in a completely foreign environment and incidently reveals that the barbarian outskirter have a rice tradition of oral poetry and song. One poster on Goodreads suggests "If you don't end up with a crush on the sidekick, you're not a lesbian". However, the relationship between Rowan and Bel seems to be one of building mutual trust and common purpose.

By contrast, the Outskirter's Secret is set amongst the red grass and we see everything through Rowan's eyes as she comes to understand the outskirters whilst Bel is a more distant figure. Rowan even starts a sexual relationship but this, especially the Outskirts, is a dangerous world and the betrayal, death and grief are always likely.

Might just be the very best fantasy I've ever read.

(reviewed 4 months after purchase)
nibah reviewed on Jan. 25, 2020
(no rating)
Might just be the very best fantasy I've ever read

You have subscribed to alerts for Rosemary Kirstein.

You have been added to Rosemary Kirstein's favorite list.

You can also sign-up to receive email notifications whenever Rosemary Kirstein releases a new book.