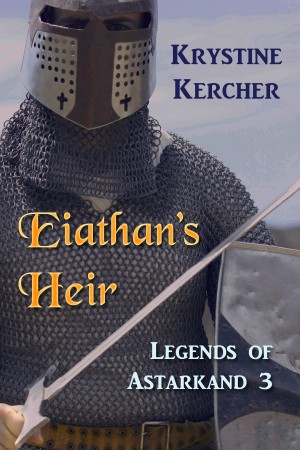 By Krystine Kercher
Rated 4.00/5 based on 1 reviews
Mayhem erupts in Hardeburg. Men's lives are at stake as an evil enchantress dogs Bjorn Horsa's footsteps and attempts to undo his efforts at securing peace. Bjorn's effort to counter Woden's evil leads to raven omens, sabotage by squirrel, and an attack by a fire-breathing dragon. Can Astarkand's problems get any worse?

Although Author and Artist Krystine Kercher did well in English and language classes throughout her schooling, she never considered writing as a possible career until she turned thirty and read ‘Til We Have Faces by C. S. Lewis. After having a series of incredibly vivid dreams, she became motivated to write fiction.

Krystine believes that God wants her to impact our world through story and art. She has published four YA fantasy books, and is currently writing a fifth. She also writes science fiction and steampunk. You can find her artwork on a number of online websites, including Zazzle, Society6, and OArttee.

Also in Series: Legends of Astarkand

I enjoyed revisiting the characters I have come to admire and care about. There was more justice done in this book without gloating over enemies or rejoicing in their doom. Normally I prefer books with more constant action, but I appreciated the series giving detail in the way of life and governance portrayed. I have never taken time to understand the hierarchical structure in a monarchy and find the series enriching. I will be watching for new books by the author.

You have subscribed to alerts for Krystine Kercher.

You have been added to Krystine Kercher's favorite list.

You can also sign-up to receive email notifications whenever Krystine Kercher releases a new book.