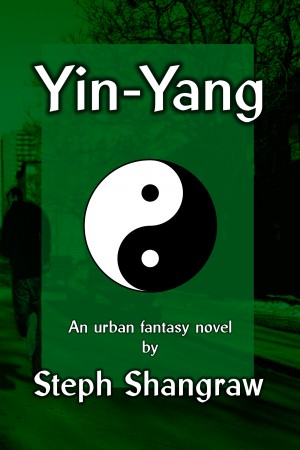 By Steph Shangraw
Rated 5.00/5 based on 5 reviews
Sensitives live, terrified, on the edge of survival in North America: mages want sensitives, but no one ever comes back to explain why. Mage society is based around owning a sensitive, who provides more power to use, as well as doing the housework and being available for transformation. But not all mages agree with the system, and not all sensitives are willing to just give up... More
An urban fantasy novel about power and freedom and trust

Mages in North America seem to have it all – typically from well-off families, and able to manipulate their environment in ways most of the world would never believe. They don’t even have to bother with the mundane details of life like housework, thanks to their sensitives, who also make a useful source for extra magical energy. After all, sensitives have no use for it themselves, and if mages weren’t meant to make use of it, then the sensitives would obviously have some way to prevent that. That a mage can transform a sensitive physically, with no restrictions beyond overall mass and basic biological viability, whereas magic tends not to work directly on any other living thing, is only further proof. And look at the way they live on their own, barely a step above animals. It’s better for them to belong to a mage.

Sensitives in North America live on the edge of society and survival – typically so paranoid they avoid hospitals and anything else that could lead to being tracked, many of them with little or no education and no legal identity or existence. Mages exist, and mages want sensitives for some reason, but no one ever comes back to explain what that reason is. Waiting every day for the hunters to notice them doesn’t lead to much motivation or hope for the future. And once they’re captured, they’re the property of someone with a terrifying amount of power over them. Anything is better than capture.

Mages are born to be the masters, and sensitives are born victims. Or are they?

Jax's life is turned upside-down when he's caught by the hunters and sold to a mage. Andreas is still mourning for his previous sensitive, though, unconsciously creating a difficult standard for Jax to live up to, all the more so while still struggling to come to terms with this new reality as Andreas' sensitive.

A runaway sensitive isn't what Van expects at the mental health centre. Is this a hunter trap, set for him and the rest of the Donovan family by the hunters? The hunters would, after all, love to see them cross the line openly and finally do something they can be charged with. Either way, Miranda's genuinely in trouble, and he can't just abandon her to it.

Snatching a sensitive out from under the hunters and hiding her is odd behaviour for a mage – but then, Catherine is an odd mage, living in disgrace in the old servants' quarters of her grandmother's house, responsible for cooking and housework. Lila owes Catherine her freedom; is there a way to help Catherine achieve her own, and at what price?

Tension is building between traditionally-minded mages and those advocating change; the Donovans and their allies are increasingly active in trying to improve life for free sensitives and protect tame ones. Then hunters find a copy of Van's book about mages and sensitives... in the hands of a free sensitive. With charges of sedition and immorality against Van, for writing unbiased observations rather than accepted "truth" and for allowing it to reach free sensitives, the outcome of this hearing is going to have consequences far beyond his own fate.

*** Yin-Yang includes a small amount of profanity and no graphic sex or violence. However, sex and gender roles and relationships within the mage/sensitive subculture are non-traditional in mainstream North American terms. The key criterion in a primary relationship is not relative sex or gender, but the pairing of mage and sensitive; given the transformation of sensitives by their mages, physical sex is non-absolute for a sensitive, and gender identity can vary as in anyone else. ***
Available ebook formats: epub mobi pdf lrf pdb html
First 30% Sample: epub mobi (Kindle) lrf more Online Reader
pdb
You set the price! USD
Buy Add to Library Give as a Gift
How gifting works
Create Widget
Tags: lgbt magic prejudice freedom canadian transformation transgender dominance social change
About Steph Shangraw

I write fantasy novels, often urban, frequently with alternative sexuality/gender themes. I've been writing for over two decades and have several completed novels, but have finally begun to look for more effective ways to get them into the world.

I would rather be writing than doing almost anything, except perhaps spending time with my three rescued cats. However, when not doing either, I'm generally making cat toys or doing something involving the lolanimals site I run.

Reviews of Yin-Yang by Steph Shangraw

I agree with an earlier reviewer in that the early chapters could do with tighter editing. However, the story develops extremely well and was a thoroughly enjoyable and interesting read. I feel it left the way open for a sequel, and hope it comes about.

This book was incredibly well-written. The characters will all believable, the magical system and judicial system was set up well, and the plot moved at a steady pace. I absolutely loved the originality of the magic system, and it is definitely worth reading.

(reviewed the day of purchase)
Arshness reviewed on May 3, 2015

TL;DR: THIS BOOK IS AWESOME. Stick with it in the beginning, and let it get going. You won't regret it!

I picked up this book on a lark when someone mentioned the author and I happened over to read their blurbs. The blurb caught my attention and the book was cheap, so I grabbed it and started reading. At first, I was a little concerned because the writing was a bit weak in the beginning and I was nervous about where the author was going with things. But I stuck with it for a short time, and it started to get increasingly better.

Throughout the book, the writing tightened up significantly, and the story was AWESOME. The characters were rich and lovable and the plot was truly intriguing! I had no idea where it was actually going to end up going by the time the real conflict started rising. It could have gone either way! It was so well done and I really enjoyed it to the last.

I think Steph Shangraw would have benefited from an editor looking over the book to tighten up the writing in the beginning as some of that nearly turned me off to it early on, but I understand that an editor isn't always possible and I'm just glad that I stuck with reading it long enough to get really hooked. Excellent. I can't believe I found a random indie book that rates a solid five stars in my very critical eye.

The only thing I really wish was different is... I wish this was a series!

I found it fascinating and also could not put it down! The world of mages and sensitives came to life in my mind!

(reviewed 4 days after purchase)
Shannon Tripp reviewed on May 27, 2014

Very well writen and compelling. Could not put it down!

You have subscribed to alerts for Steph Shangraw.

You have been added to Steph Shangraw's favorite list.

You can also sign-up to receive email notifications whenever Steph Shangraw releases a new book.