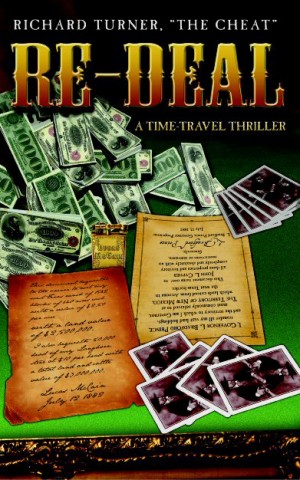 By Richard Turner
Matt McCain, a young man trying to overcome personal loss and family misfortune, and his amigo Juan, a Mexican orphan turned evangelist, are pitted against the Cyphers, a family that utilizes evil for every gain. The presence of Miss Guided, the angel who doesn’t always get it right, changes them all. A time-traveling race against evil and misfortune Re-Deals history in a startling conclusion.

Richard Turner has been featured on television shows such as “That's Incredible,” “Ripley’s Believe It or Not,” and “The 700 Club.” His unparalleled touch with a pack of fifty-two has been written about in major publications such as the Los Angelus Times, the Dallas Times Herald, and the Orlando Sentinel.

He developed an early affinity for tricks used by Old West gamblers after watching the TV show “Maverick.” His life as a card mechanic began at age seven when he started to develop the skills to become a world class card shark like James Garner's character. But at age nine, tragedy struck; a disease destroyed his retinas and his eyesight. However, from this obstacle came opportunity, and Richard began to develop his mind and body.

He has earned a fifth degree black belt in karate, hunted sharks, swung on a trapeze, and spent ten to twenty hours a day for more than thirty years developing his one-of-a-kind card show — all with the supposed limitation of vision four times lower than what is considered legally blind.

In addition to designing and producing a series of educational games, he has written, produced, and performed in a series of DVDs that are world-wide best-sellers.

With his comedy partner Miss Guided (his wife Kim), Richard has performed for numerous churches and scores of large corporations. He has entertained legions of celebrities, including Muhammad Ali, Johnny Carson, Gene Kelly, and Bob Hope, and he has spoken to audiences large and small at military, tourism, business, civic, educational, and entertainment venues. Recently Richard and Miss Guided appeared with General Colin Powell, former Secretary of State.

The topics of the Turners' programs are honesty, integrity, loyalty, perseverance, overcoming obstacles, and becoming the best. Because of his community involvement, Richard has received many honors and awards, including the FBI Director’s Community Leadership Award, the Golden Lion Award in Magic from Siegfried and Roy of Las Vegas, Honorary Inspector U. S. Air Force Thunderbirds, and inductee into the Magic Castle Hall of Fame.

Organized crime families have pursued him with million-dollar offers to cheat in dishonest card games. When offers failed, threats ensued. The police department trained and armed him to protect himself since he has accepted none of the offers and succumbed to none of the threats. As a devout Christian, Richard has chosen to succeed honestly and to serve as a role model, demonstrating the traits that are the topics of his presentations.

Richard’s latest venture is writing. He has completed a time-travel thriller about the guardian angel Miss Guided and is currently working on his autobiography.

You have subscribed to alerts for Richard Turner.

You have been added to Richard Turner's favorite list.

You can also sign-up to receive email notifications whenever Richard Turner releases a new book.