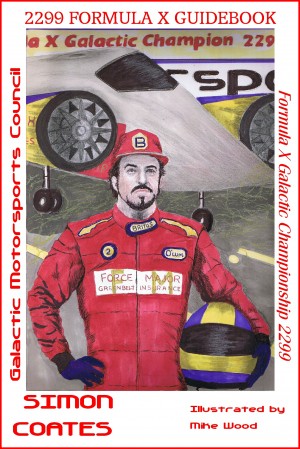 By Simon Coates
Produced by the Galactic Motorsports Council, the Guidebook to the 2299 Formula X Galactic Championship gives you, the reader, an insight into the racing season for the year 2299. With a foreword from Council President Vance Lavarone, the guidebook gives details of past champions, a review and results of the 2298 season, and notes for significant dates and events during 2299. More
Welcome to the fastest, loudest and most exciting motorsport ever conceived by humans! Think of Formula One but with spaceships instead of cars and you will be pretty much there. This Guidebook is a preview to the 2299 Formula X racing season, with details of the teams competing along with pilot profiles. It also includes a brief history of the sport and full results of the 2298 season. Throughout the book there are colour adverts for supporting companies and organisations involved with the sport, and stunning pilot portraits draw by artist Mike Wood.
The Guidebook acts as a preview to the accompanying book The Diary of Silas Volante, which is written in the form of a diary by Silas himself during the 2299 season as he attempts to win the prestigious Formula X Galactic Championship.
Contains over fifty colour images, including advertisements of companies who support Formula X and portraits of pilots taking part in the racing series by Mike Wood.
Available ebook formats: epub mobi pdf rtf pdb txt html
First 20% Sample: epub mobi (Kindle) pdb Online Reader
Price: $3.49 USD
Buy Add to Library Give as a Gift
How gifting works
Create Widget
Tags: future space futuristic spaceship racing sport motorsport
About Simon Coates

You have subscribed to Smashwords Alerts new release notifications for Simon Coates.