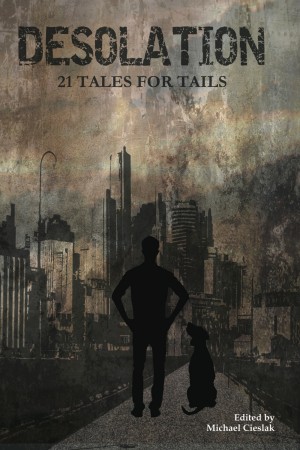 and much, much more.

Desolation: 21 Tales for Tails is a collection of dark speculative fiction whose stories all focus on themes of loneliness, isolation, and abandonment. Enter into strange worlds envisioned by some of the most inventive authors writing today.

A portion of the proceeds of each sale of Desolation: 21 Tales for Tails benefits the Last Day Dog Rescue Organization.

Michael Cieslak is a lifetime reader and writer of horror, mystery, and speculative fiction. A native of Detroit, he still lives within 500 yards of the city with his wife and their two dogs Tesla and Titus. The house is covered in Halloween decorations in October and dragons the rest of the year. He is an officer in the Great Lakes Association of Horror Writers. His works have appeared in a number of collections including DOA: Extreme Horror, Dead Science, Vicious Verses and Reanimated Rhymes, the GLAHW anthologies, and Alter Egos Vol 1. He is the current Literature Track Head for Penguicon. Michael’s most recent endeavor is the Dragon’s Roost Press imprint which will be publishing it’s first anthology Desolation, 21 Tales for Tails in 2014. A portion of the proceeds of each sale of Desolation will benefit the Last Day Dog Rescue organization.

Michael’s mental excreta (including his personal blog They Napalmed My Shrubbery This Morning) can be found on-line at thedragonsroost.net.

You have subscribed to alerts for Michael Cieslak.

You have been added to Michael Cieslak's favorite list.

You can also sign-up to receive email notifications whenever Michael Cieslak releases a new book.