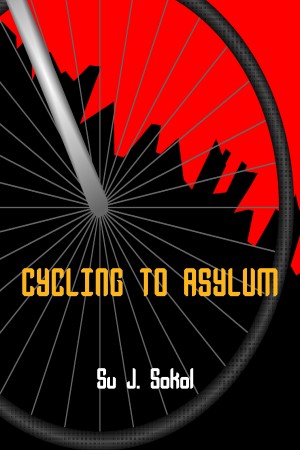 By Su J. Sokol
Rated 5.00/5 based on 1 review
In a near-future, dystopian New York City, a family is forced to flee. They cross the border by bicycle into Quebec and apply for refugee status. More
In a near-future New York subject to an increasingly hostile government, Laek, a non-conformist history teacher, and Janie, an activist lawyer, struggle to lead good and useful lives. After Laek is badly injured in a brutal confrontation with the police, they are forced to leave their home and loved ones behind, fleeing across the border by bicycle with their two young children. In a Montréal that the future has also transformed, the family faces new challenges: convincing the authorities to grant them refugee status and integrating into Québec society. Will they find safety in their new home? Told from the points of view of the four family members, Cycling to Asylum, longlisted for the Sunburst Award for Excellence in Canadian Literature of the Fantastic. is a unique work of interstitial fiction from an exciting new Montreal author.
Available ebook formats: epub pdf lrf pdb txt html
First 15% Sample: lrf pdb Online Reader
Price: $5.99 USD
Buy Add to Library Give as a Gift
How gifting works
Create Widget
Tags: family drama speculative fiction new york montreal activism cycling political action interstitial fiction queer characters
About Su J. Sokol

Su J  Sokol is a social rights advocate, a freelance editor, and a writer of speculative, liminal, and interstitial fiction. A former legal services lawyer from New York City, xe now makes Montréal xyr home. Sokol is the author of three novels: Cycling to Asylum, which was long-listed for the Sunburst Award for Excellence in Canadian Literature of the Fantastic and has been optioned for development into a feature-length film, Run J Run (2019), and Zee (2020). Sokol's short fiction has appeared or is upcoming in various magazines and anthologies including in The Future Fire, Spark: A Creative Anthology, Glittership: an LGBTQ Science Fiction and Fantasy Podcast, After the Orange: Ruin and Recovery (B Cubed Press), and Amazing Stories. When xe is not writing, battling slumlords, bringing evil bureaucracies to their knees, and smashing borders, Sokol curates and participates in readings and literary events in Canada and abroad.

Reviews of Cycling to Asylum by Su J. Sokol

Very good, engaging characters, a too-real slice of life view of a family seeking refugee status after fleeing a "safe" country. This book is partly responsible for my recent purchase of a bicycle.

You have subscribed to alerts for Su J. Sokol.

You have been added to Su J. Sokol's favorite list.

You can also sign-up to receive email notifications whenever Su J. Sokol releases a new book.